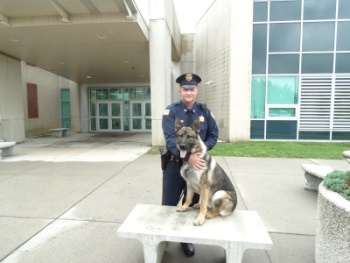 “It’s an honor to welcome this highly trained K-9 team to our unit,” said Sheriff Shaun Golden. “S/O Mindo and his partner Tango will prove to be a great asset to Monmouth County and local police departments when it comes to combatting the proliferation of drugs.”

During the graduation ceremony, held in Hamilton Township, each team received diplomas and officially became narcotics or explosive detection teams who met all the requirements set forth by the State of New Jersey, Office of Attorney General guidelines.

“I’m grateful to the Monmouth County Sheriff’s Office for providing Tango and me with this opportunity, and, proud to be a part of our narcotics detection team, which has seized a significant amount of narcotics and money as a result of drug investigations,” said S/O Michael Mindo.