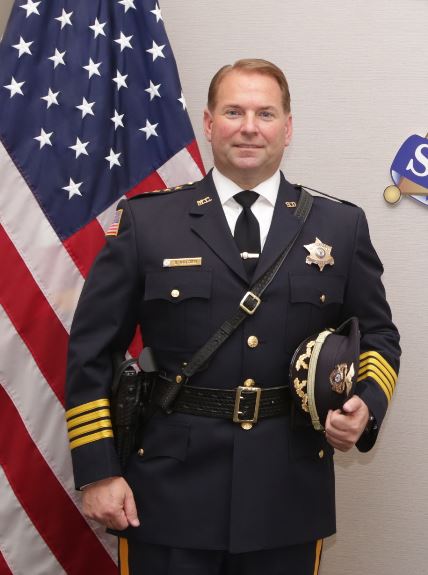 The Monmouth County Sheriff is an elected official authorized by the constitution of the State of New Jersey and carries a three year term. Sheriff Shaun Golden is the 76th Sheriff of Monmouth County and is the Chief Executive of the agency which consists of four divisions:  Law Enforcement, Communications, Special Operations, and Corrections, as well as, the administration of the Monmouth County Police Academy and the Office of Emergency Management, which, played the lead role in preparing for Superstorm Sandy, and, coordinating the response and recover efforts for the storm.

Throughout the years, the Monmouth County Sheriff’s Office has developed innovative programs and partnerships.  Under Sheriff Golden’s leadership, the Office offers over 30 Community safety programs including Citizens Police Academy, VISCOMP (Volunteers in Sheriff’s Community Programs), Sheriff Youth Week, Child ID & Senior ID Program, Veteran’s Initiative which includes partnering with veteran organizations, such as TEAM Rubicon, the creation of a Veterans Service Council advisory committee and Programs which engage veterans with in the community and provide veterans access to needed services and emergency training services to support  residence during natural disasters. Distracted Driving, Students Professional Awareness, Bicycle Safety and Court Security initiative, and others.  Sheriff Golden has partnered with Neptune High School in establishing Explorer Post #1 in Neptune High School for the Jump Start Law/Criminal Justice students as well as, partnering with Neptune for the annual Sheriff Youth Week Program.  Sheriff Golden, implemented the HOPE One Monmouth Mobile Unit, an innovative, leading approach to combating the opioid epidemic in Monmouth County. Providing HOPE, to those suffering from addiction.  Implementation of rehabilitation programs,  an initiative for inmates with substance use disorder from the Monmouth County Correctional Institution. A treatment plan for inmates.

In other cooperative efforts the Sheriff’s Office works with the Office on Aging with Senior programs and, most importantly, the Project Lifesaver Program that is an electronic location system for memory impaired seniors and children with Autism.

The Monmouth County Sheriff’s Office is nationally accredited in all areas of operation, and continues to maintain or exceed those nationally accepted standards. The Sheriff has been instrumental in promoting shared services in Monmouth County, specifically through the expansion of the Communications Division, to cost effectively address the ever increasing needs of the Monmouth County’s first responders.

Prior to being elected sheriff in 2010, Mr. Golden served as undersheriff where he was responsible for the Monmouth County 9-1-1 Communications Center and the communications and computer networking equipment for both county and municipal agencies.  Through the 9-1-1 Center, he has been instrumental in promoting and implementing cost saving measures through shared services with towns.

A lifelong resident of Monmouth County, Sheriff Golden is experience in law enforcement and public administration.  He was a career law enforcement officer for 25 years, graduating number one in his class at the Monmouth County Police Academy. He served as a police officer with the Colts Neck Police Department and the Toms River Police Department, where he was responsible for the information and technology office. He also worked as a certified paramedic for MONOC, serving Monmouth and Ocean Counties, and a volunteer firefighter and EMT.

Sheriff Golden holds an Associate’s Degree from Brookdale Community College, (1990); a Master’s Degree in Administration from Seton Hall University is a NJ Certified Public Manager, an adjunct professor at Monmouth University with the Department of Political Science and Public Policy and has completed the prestigious Mid-Atlantic Law Enforcement Executive Development Seminar (MA-LEEDS).

Sheriff Golden is on the Executive Board of the Constitutional Officer’s Association of New Jersey (COANJ), and served as past President, Executive Board of the Sheriff’s Association of New Jersey (SANJ), currently serving as the Secretary, the National Sheriff’s Association, heading the Homeland Security and Traffic Advisory Committees, is a member of the Board of Trustees for the Monmouth-Ocean Foundation for Children (MOFFC), on the board of the Monmouth County Prevention Coalition and served as Chairman of the Monmouth Council of Boy Scouts Exploring Committee and serves as Chairman of the 21st Annual Blue Mass Committee.  The Sheriff has received Community Service Award from both the Latino American Association of New Jersey and the Silver Gull Award from the Monmouth Ocean Development Council.  He has also received the Good Scout Award from the Western Monmouth Council of Boy Scouts, as well as the Maurice Pollak Award for Distinguished Community Service from Monmouth University.