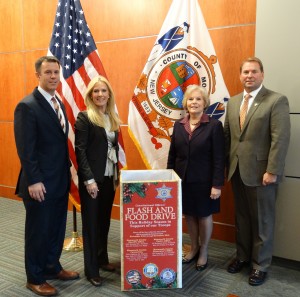 As many begin the holiday season by spending time with family, shopping and attending parties, Monmouth CountyClerk Christine Hanlon, Sheriff Shaun Golden, Acting Prosecutor Christopher Gramiccioni and Surrogate Rosemarie Peters want residents to spread some cheer to our troops overseas. As a result Monmouth County’s four constitutional officers have kicked off a Flash and Food drive.

“Our military men and women who defend our country and sacrifice for our freedom every day deserve the utmost appreciation,” said Clerk Christine Hanlon. “As a way of saying thank you, we will be collecting flash drives, as well as nonperishable foods, to send to those brave men and women overseas.”

The five collection sites which will be accepting donations from Nov. 24th through Dec. 20th are as follows:

According to the U.S. Department of Defense there are 191,621 service members deployed in all foreign countries and aboard ships at sea, and, 1,145,093 stationed within the United States.

“As a law enforcement agency, we show a strong commitment to our troops,” said Sheriff Shaun Golden. “It’s important to remain appreciative and supportive of the men and women who sacrifice a lot to keep us safe. This small gesture can have a big impact on our troops and provide them with some holiday joy this season.”

“Being a member of the U.S. Navy, I know firsthand what it’s like to be deployed during the holidays,” said Acting Prosecutor Christopher Gramiccioni. “We need to honor those sacrifices the armed forces make and continue to support them through these types of efforts year round, to show them, they are not forgotten.”

Once the items are collected, two organizations, “American Recreational Military Service – A.R.M.S” and “Operation Gratitude” will deliver them to the most needed areas.

“It important to support charitable giving during the holidays and throughout the year,” said Surrogate Rosemarie Peters. “Please make a donation at one of the collection sites in an effort to make the holidays special for our troops. Even a little goes a long way.”

Some Suggested Items Include:

Flash Drives: A common request from the troops.