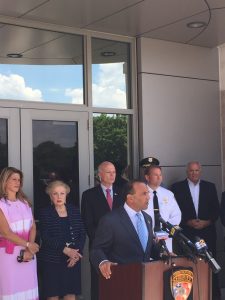 Freehold: Freeholder Director Thomas A. Arnone and Sheriff Shaun Golden are calling on the State of New Jersey to find out what happened to the funds collected by the 9-1-1 system and emergency response fee that is charged to taxpayers, on all phone bills. Statewide, the fee generates an estimated $120 million annually and is to be allocated to upgrade state, county and local 9-1-1 systems. The plan specifically calls for infrastructures of 9-1-1 centers also known as Public Safety Answering Points (PSAPs) to be able to receive text messages, photos and videos during emergency situations. Unfortunately, the majority of the collected funds have not been used for its intended purposes.

“Monmouth County wants to move forward with timely upgrades and improvements to its 9-1-1 system, yet we are wondering why the funds being collected for this purpose are not finding their way to the county treasury,” said Freeholder Director Thomas A. Arnone. “We estimate that our taxpayers are paying more than $5 million annually as their share of the 9-1-1 system fee. We want that money to come back to fund 9-1-1 improvements that will serve residents, businesses and visitors.”

Presently, taxpayers pay a 90 cent 9-1-1 system and emergency response fee which is part of all monthly phone bills. A portion of that money should have been allocated to implement the PSAPs infrastructures through Next Generation 911(NG911).

NG911 systems will facilitate public safety telecommunicators throughout the state to receive digital information in the form of emergency text messages, photos and videos. While the technology is available, upgrades, plans, coordination and training can’t be implemented without adequate funding.

“Our 9-1-1 systems need to be upgraded with this technology in order for PSAPs to enhance the public safety and well-being of our residents during emergency situations,” said Sheriff Shaun Golden. “Without this funding, which we believe has not been spent appropriately, no advancement will take place. We are calling on the state to return the funds back into the account in an effort to move ahead with the original plan of building a cutting edge 9-1-1 system.” 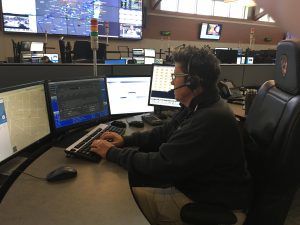 According to a report issued by the FCC for 2014, $120 million was generated for the trust fund in which an estimated $107 million was used for other purposes. Monmouth County hasn’t received any funding since 2011, and, since the inception of the trust fund in 2005, the county received a total of $1.14 million for 9-1-1 services. If the county had been reimbursed at the 2008 amount of $350,000, it would have received nearly $2.5 million over the past six years.

A proposed state assembly bill (A-3461/3544), is calling for an additional 9 cents to be added to the 9-1-1 system and emergency response fee which would raise the surcharge for taxpayers from 90 cents to 99 cents a month.

“We are vehemently opposed to this bill, since taxpayers should not have to bear the burden of paying additional money into the fund when it is being used for other purposes,” said Sheriff Golden. “Such an increase is unjust, especially without an explanation from the state as to where the funding went or if it will replenished.” 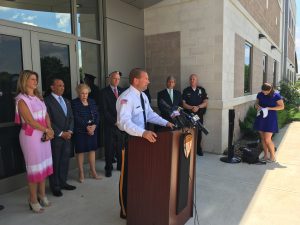 “The wireless carriers and the landline providers are forwarding the collected 9-1-1 system fees to the state’s coffers, but we would like an accounting of where that money goes from there,” said Freeholder Lillian G. Burry liaison to the Sheriff’s Office. “This fee is meant to be a funding source for 9-1-1 communication upgrades. It is time to have the money disbursed to Monmouth County.”

The Monmouth County 9-1-1 Communications Center is a state of the art facility and blueprint for emergency services nationwide. It answers 9-1-1 calls for 49 jurisdictions and dispatches for 21 police, 59 fire and 32 EMS agencies. The center handles 650,000 calls annually and is staffed with 118 full time employees. With all its advances in 9-1-1 services in recent years, Monmouth County’s PSAP, like many others, are at a standstill with digital information, since it cannot move forward with the Next Gen 911 internet protocol, based system.

For a downloadable version of this press release, click here:  News-Release-County-Officials-Seek-Answers-From-State-As-To-Where-911-Funding-Went-3