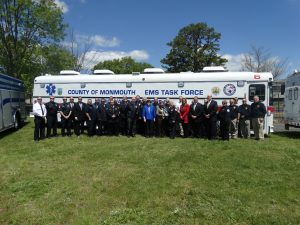 Neptune: Sheriff Shaun Golden is pleased to announce a partnership with the Monmouth County Sheriff’s Office, NJ EMS Task Force, Neptune Township and the NJ Department of Health during National EMS Week. After some time in the making, the New Jersey EMS Task Force, now, has a long awaited place to call home at an operations center in Neptune. The task force is a statewide disaster response and emergency planning organization, made up of individual and specialty members from both career and volunteer EMS providers.

“The opening of this premier facility could not come at a better time as we celebrate the hard work of our EMTs during National EMS Week,” said Sheriff Shaun Golden, a former paramedic of MONOC and  EMT. “You will not find a more dedicated and committed group of people, made up mostly of volunteers, who administer lifesaving efforts and emergency care. That’s why it’s vital to provide the NJ EMS Task Force and the EMS agencies in Monmouth County with their own base of operations. It will serve as an educational facility and coordination center for EMS statewide to ensure the safety of our residents.”

The new Sheriff’s Emergency Medical Training Center, which serves as a backup 9-1-1 Communications Center, located on Route 33 in Neptune will also provide EMTs with an opportunity to train on EMS special operations vehicles and emergency equipment including the Medical Ambulance Bus, (MAB).

“The NJ EMS Task Force has been in existence since 2004. As the members became trained and equipped throughout the years, we scrambled to find meeting and training locations,” said Michael Bascom, Monmouth County EMS Coordinator and a task force leader. “Now that we have this facility to conduct meetings and training operations from, a void that’s existed for more than 10 years has been filled. We appreciate the support of Sheriff Golden and the Monmouth County Board of Chosen Freeholders in this great endeavor.”

The NJ EMS Task is run through NJ Department of Health. It supports emergency response operations at major incidents and planned events throughout the state and region. The task force includes mass care, hazmat team and communications and technology specialists plus provides incident management to areas in need.

“The NJ EMS Task Force is a critical asset for the state’s emergency medical services community,” said Acting Department of  Health Commissioner Cathleen D. Bennett. “The combination of specialized equipment, trained personnel and detailed response plans has made the NJ EMS Task Force a resource requested for both scheduled and emergent situations, reinforcing the capabilities of local emergency responders.  Having a headquarters to host classes, assess equipment, and have meetings will help to strengthen the synergy that is the hallmark of NJ EMS Task Force.”

“As an active member of the Holmdel Fist Aid Squad, I know how critical the NJ EMS Task Force is at large scale events,” said Deputy Freeholder Director Serena DiMaso. “During Superstorm Sandy, they planned, prepared and had a tremendous role in response and recovery efforts to those towns and residents in need. That type of response will enhance even more, now that there is a base of operations to meet at and deploy from.”

For a downloadable version of this press release, click here:  News-Release-MCSO-Opens-Emergency-Medical-Trainig-Center