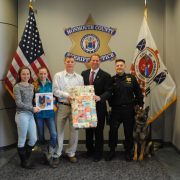 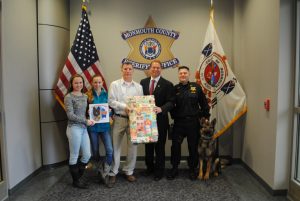 Freehold NJ: Sheriff Shaun Golden gratefully accepted the generous donation of a brand new bullet proof vest provided to the Monmouth County Sheriff’s Office K-9 Unit, by children’s book author James Wiater of Millstone. Mr. Wiater, author of The Adventures of Solo, The Big Dog, named the book after K-9 Solo, in his memory. Solo, a German Shepherd, was a member of the Monmouth County Sheriff’s Office K-9 Unit. He was shot and killed in the line of duty in 1998 during an attempted apprehension of a wanted individual.  The purchase of the bullet proof vest will be used by K-9 Edge, who is trained in narcotics/patrol.

“The Monmouth County Sheriff’s Office is grateful to Mr. Wiater for his generosity and dedication to enhancing the safety of our K-9s,”said Sheriff Shaun Golden. “Members of our K-9 Unit are called upon year-round to assist local police departments with narcotics detection, explosive detection and criminal or missing person searches and it’s crucial they are protected while maintaining public safety.”

The Monmouth County Sheriff’s Office was the first law enforcement agency to receive a vest, from the proceeds of the book, which is about a police dog’s adventures. Wiater plans to donate additional vests to other law enforcement agencies in the future. The cost for the vest was $2600.

es every day and K-9 Solo died while protecting the public.” said James Wiater, author. “I’m dedicated to giving something back. It not only shows my appreciation to law enforcement, but, at the same time educates children on how these dogs serve the public.”

For a downloadable version of this press release, click here:  News-Release-Generous-Donation-Increases-Safety-of-K-9-Unit

Sheriff Golden And Partners In Law Enforcement Participate In Conversation With...