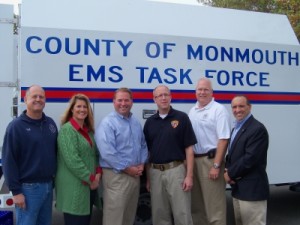 Monmouth County Sheriff Shaun Golden and Freeholder Director Thomas A. Arnone presented the key of a new Rapid Response Mass Casualty Vehicle to the Wall Township First Aid and Rescue Squad on October 12. The vehicle, a Ford F550 utility truck, will be stationed in Wall and comes fully equipped with first aid supplies which include oxygen, bandages, back boards and neck braces, among other items.

“This vehicle carries enough equipment and supplies to treat 50 patients, and, will be deployed to large incidents within Monmouth County,” said Sheriff Shaun Golden. “The vehicle will facilitate a rapid response when there is a need to treat people at the scene or transport them to hospitals.”

The truck will be incorporated into the Monmouth County Sheriff’s Office, Office of Emergency Management’s EMS Task Force. It was purchased through Homeland Security funds at an approximate cost of $66,000 and will be used in conjunction with the Medical Ambulance Buses, which are designed to provide mass casualty incident response and transport, medical evacuations, on site triage, firefighter and EMS rehabilitation and medical support for long term emergency incidents.

“Providing these assets to support the volunteer first responders in our communities is another example of how Monmouth County is leading the way in shared services,” said Freeholder Director Thomas A. Arnone.