Upper Freehold: As the one year anniversary of Superstorm Sandy approaches, Monmouth County Sheriff Shaun Golden and the Office of Emergency Management (OEM) are rolling out a new program aimed at assisting seniors in the event of an emergency or disaster. Seniors Taking on Readiness Measures, STORM, was presented to residents of the Four Seasons at Upper Freehold on October 17. The program equips those who are among the most vulnerable population with emergency preparedness information, assists them in creating a family disaster plan, and, provides them with an emergency kit.

“After Hurricane Irene and Superstorm Sandy impacted Monmouth County with mandatory evacuations and the need to shelter residents, it was recognized that many people did not have a family emergency plan,” said Sheriff Shaun Golden, whose agency runs OEM. “STORM provides people with the tools to build a plan in an effort to strengthen resiliency, sustainability and expedite recovery during emergencies and disasters.”

The Monmouth County Office of Emergency Management will be travelling throughout the county to present STORM.

During the program, seniors will be provided with a family disaster plan booklet, which asks for personal, family, work, medical, insurance, emergency & evacuation related information.

Once the booklet is completed, they will be provided with a free emergency supply kit, which includes basic necessities for use during an emergency.

The National Readiness Campaign adopted by FEMA includes four basic components which asks residents to be informed, get involved, have a plan and build an emergency kit.

“Many residents are well informed and involved, but they fall short in creating a plan and building the kit,” said Mike Oppegaard, OEM Coordinator. “STORM gives them that plan and equips them with the basic necessities in the event they need to go to a shelter. All those tools will lessen the impact on emergency management services during a disaster or emergency.”

The cost of STORM is $30,000. Half was funded through the Department of Homeland Security and the rest through OEM. Corporate sponsorship will be sought to fund the program as it moves forward. 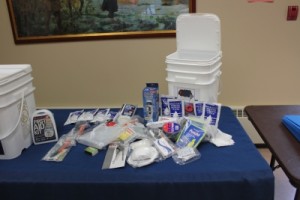