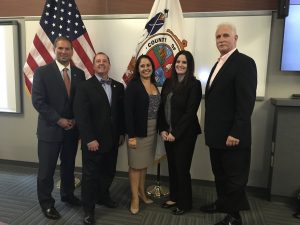 Freehold: Sheriff Shaun Golden continues to be a leader in the fight against drug abuse as the heroin epidemic remains one of the most important crisis law enforcement in Monmouth County must conquer. As the number of opiate related deaths rise, the Monmouth County Sheriff’s Office held the first of its kind heroin forum in the state called, Student Ambassadors For Heroin Use Prevention, on Oct. 20. The program bridged students and leaders of various agencies together, to address opiate addiction.

“Law enforcement, educational and behavioral healthcare professionals can’t combat this problem alone,” said Sheriff Shaun Golden. “That’s why it’s of the utmost importance that our adolescents and young adults, along with the professionals, work together to provide new and innovative approaches, strategies and solutions. Through this initiative we hope to inhibit the wave of opiate use, addiction and related deaths.”

“We learned that there isn’t one solution, but many, which we worked on today,” said Alexandra Abramzon, student, Marlboro High School. “For instance, bring in older students who will reach out to the lower grades and serve as role models. In addition, we proposed creating a drug prevention club, opening up local help centers for adolescents and creating messaging through social media.”

“This student ambassador program was a huge learning experience for us and we are proud to have become part of the team,”‘ said Juliana Rodriguez, student of Poseidon Early College High School. “Our group proposed to have more accessible resources such as hotlines and websites. We also think educating the parents during back to school night about what’s going on in the communities would help address this issue, since you can reach a lot of parents and get their involvement.” 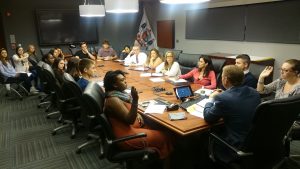 The abuse of opiates has reached epidemic proportions throughout the nation as well as in our communities. In 2015, Monmouth County lost 114 residents to opiate related deaths; it’s projected the number will top 150 for 2016. Those numbers are troubling, especially compared to the most recent statistics of highway fatalities and homicides in 2015, which were 47 and 9 respectively.

“This event is for our students whose friends are being lost to this insidious epidemic,” said Principal Richard Allen, Poseidon Early College HS.  “Through the program our youths can help become effective peer leaders in the fight against opiate abuse, since the agents of change are some of these young men and women who participated in the conference.”

Douglas Collier, Drug Initiative Coordinator & Law Enforcement Liaison, NJ Office of Attorney General was the featured speaker of the program and discussed the devastating and deadly effects of heroin, dependency issues, the damage drugs have on brain development and the various faces of addiction.

“When you leave here know this, that substance abuse is a brain disease,” said Douglas Collier, Drug Initiative Coordinator & Law Enforcement Liaison, NJ Office of Attorney General. “It’s a progression and that’s why it’s important we need to hear from you, on what needs to be done. We don’t have all the answers. It’s destroying our communities and poisoning our backyards.

“In many cases the abuse begins at home, in the medicine cabinet, with prescription drugs, which often lead to other serious and dangerous street drugs, such as heroin,” said Mary Pat Angelini, CEO, Preferred Behavioral Health. “I applaud Sheriff Golden for the integral role he plays in the prevention arena. Substance use prevention is multifaceted and this educational workshop along with the many other initiatives the sheriff’s office works on during the year, raises awareness to this devastating issue.”

The Monmouth County Sheriff’s Office thanks all the participants of the program for their dedication and commitment to this important topic and especially acknowledges Preferred Behavioral Health and Asbury Park/Wall Elks Lodge #128, the sponsors of the program.

For a downloadable version of this press release, click here:  News-Release-Monmouth-County-Sheriffs-Office-Holds-First-of-its-Kind-Heroin-Forum