Monmouth County: As the two year anniversary of Superstorm Sandy approaches, Sheriff Shaun Golden is pleased to announce the strides and initiatives Monmouth County continues to make in preparing for disasters and building resiliency.

“Thankfully, we have been spared with a quiet hurricane season this year,” said Sheriff Shaun Golden. “Even so, we cannot let our guard down, particularly, when we look back at the destruction Superstorm Sandy caused as it swept through Monmouth County, on Oct. 29, 2012.” 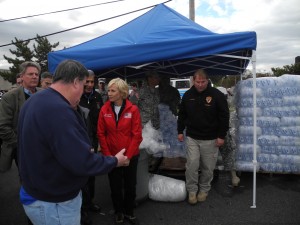 The Monmouth County Sheriff’s Office, Office of Emergency Management, coordinated the response and recovery efforts before, during and after Superstorm Sandy, along with the agency’s law enforcement, communications and corrections divisions. Those efforts proved to be invaluable in assisting Monmouth County’s fifty-three municipalities. Through continued determination the past two years, the sheriff’s office is even more equipped to deal with disasters, in anticipation of future emergency needs.

STORM, Seniors Taking on Readiness Measures was created as a result of Sandy. The program is aimed at assisting seniors, who are among the most vulnerable population, in the event of an emergency or disaster.

STORM which is conducted at senior facilities, equips those with emergency preparedness information, assists them with a family disaster plan and provides them with a free emergency supply kit.

Since STORM was implemented one year ago, 1200 kits have been distributed throughout 22 towns.

“We have found that residents are well informed and involved, but they fall short in creating a plan and building the kit, which needs to be done long before a disaster or an emergency strikes,” said Mike Oppegaard, OEM Coordinator. “STORM provides people with that plan and equips them with the basic necessities in the event they need to go to a public shelter or are asked to shelter in place.”

In addition to STORM, OEM formed other programs as a result of Superstorm Sandy aimed to help strengthen resiliency, and expedite recovery. A recruiting campaign was launched with the United Way of Monmouth which seeks volunteers to assist in the staffing of evacuation shelters during emergencies, and, the Monmouth County CART (County Animal Response Team) was created. CART builds and supports a unifying partnership between governmental, not-for-profit organizations, animal industry, and volunteers in order to facilitate local animal disaster preparedness and response development. In addition, OEM has also built and strengthened public private partnerships with large businesses such as home improvement, grocery and department stores, which deliver effective and efficient resources and assets essential to overall preparedness, response and recovery. A planning summit in 2015 will be held to share information with volunteer organizations and faith based groups who can assist in varying capacities during emergencies. Assessments of fuel stations that have a generator have been completed. The next step is to obtain agreements with these stations to ensure fuel supply for emergency and essential services. In addition, Monmouth County has a new software solution that will better track damages and the costs associated with each damaged site. This will assist with completing FEMA reimbursement paperwork.

The sheriff’s office continues to urge residents to have emergency notifications and public safety information at their fingertips, through the Monmouth County Sheriff’s Office Application (app) for smartphones. The application is designed for Android and iOS platforms and can be downloaded for free.

The app provides instant access to sheriff’s office related information, which includes real-time emergency notifications through its integrated push notification system that automatically displays the message on the phone. Users are able to be instantly alerted to weather, or other emergency related situations, from the Monmouth County Sheriff’s Office and the agency’s Office of Emergency Management.

Along with the strides Monmouth County has made through programs and initiatives, last April Sheriff Golden and the Board of Chosen Freeholders opened the Monmouth County Sheriff’s Office Public Safety Center in Freehold. The 45,000 square foot center serves as focal point for emergency services throughout the county and a blueprint statewide. The implementation of new technology, shared communications and interoperability post Superstorm Sandy further ensures the safety of residents during emergencies and large scale incidents.

“The hope is that none of us will ever have to endure another storm of Sandy’s magnitude,” said Sheriff Golden. “Should a large scale incident occur, it’s reassuring to know Monmouth County is stronger, more resilient and prepared for what may come our way.”