The 12 year old German shepherd, who specialized in explosive detection, was recently diagnosed with lung cancer, which spread quickly. On Thursday, March 19, K-9s and their handlers from numerous law enforcement agencies lined up outside of NorthStar Vets in Robbinsville, where Falko was provided with the proper send off.

“The Monmouth County Sheriff’s Office is extremely saddened on the passing of this exceptional and loyal member of our K-9 unit and we thank everyone for their continued support,” said Sheriff Shaun Golden. “Falko played a pivotal role in helping to protect our county against criminal and terroristic threats and was an effective measure in providing a fast and specialized response to potentially dangerous situations. We are grateful to Falko for his service. He will be missed.” 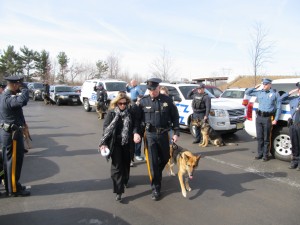 Falko came to the sheriff’s office upon graduating from the New Jersey State Police Canine Academy. He began service in 2004 with S/O James Fay. Throughout the course of their work, S/O Fay and Falko responded to numerous school bomb threats and unattended packages, in an effort to detect or rule out dangerous materials. They worked at major transportation hubs, large building, universities and stadiums.

They were called upon for several presidential details and the 2014 Super Bowl. In addition, the K-9 team participated in demos at schools and community events throughout the year. Falko was also an original member of the New Jersey Detect and Render Safe Task Force, which is activated during large scale events throughout the state. “Falko was my partner. He was a great dog, and great dogs never leave, they live in your heart forever,” said S/O James Fay. Falko’s medical bills cost $2100. Vet-I Care, a 501 (c) (3), non- profit charitable organization committed to assisting families with specialty and emergency care for their pets, donated $1,000 to help cover the expense. The remaining cost will be paid for through the Monmouth County Sheriff’s Office K-9 donation fund.
“The Vet-I-Care Foundation is proud to be providing a financial grant to this heroic community servant, Falko. He was a wonderful dog and we wish the Monmouth County Sheriff’s Office all the best during this difficult time.” said Eileen Schuck, Foundation Director, Vet-I-Care.

The sheriff’s office would like to thank those who sent well wishes to Falko and S/O Fay. A special acknowledgement goes to Falko’s veterinary specialists from NorthStar Vets in Robbinsville and Four Paws Animal Hospital in Englishtown.

The Monmouth County Sheriff’s Office K-9 Unit presently consists of six sheriff’s officers/K-9 handlers and dogs which include one tracking team, one narcotics team, one explosive detection teams, one explosive/ patrol, one patrol and one narcotics/ patrol team. The unit undergoes rigorous ongoing training programs to maintain proficiency in basic skills and ensure continued effective performance in the field.