Freehold: Sheriff Shaun Golden and the Board of Chosen Freeholders are proud to announce the opening of the new Monmouth County Sheriff’s Office Public Safety Center, which will serve as the focal point for emergency services throughout Monmouth County. After years in the making, the new center is complete and officially opened its doors on April 29, during a ceremony, attended by state, county and local officials along with Lt. Governor Kim Guadagno, the former sheriff of Monmouth County.

“This day comes after endless planning, hard work and dedication on all levels,” said Sheriff Shaun Golden. “As sheriff, I’m grateful to have had the opportunity to be a part of such a tremendous achievement, since this center enhances public safety and will serve as a blueprint for emergency services statewide.”

The new 45,000 square foot state of the art facility is located at 2500 Kozloski Rd. in Freehold. The move comes after the former Monmouth County 9-1-1 Communications Center, adjacent to the new center, which was housed in a 4,500 square foot building since 1986, outgrew its operations and ran out of space to expand call capacity and dispatch services. 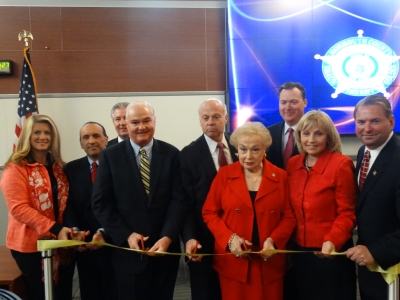 “Communication services have come a long way in Monmouth County. The first 9-1-1 center was housed in a converted closet at the Hall of Records in 1936,” said Freeholder Director Lillian G. Burry, liaison to the Monmouth County Sheriff’s Office. “Today, this high tech, state of the art facility provides cutting edge services that will serve the residents and first responders of Monmouth County well for decades to come.”

The cost to construct the public safety center was $23.2 million and is part of Monmouth County’s capital improvement plan. It is the largest countywide shared service and strengthens public safety and efficiency.

“This facility has enough capacity to provide shared communications to all municipalities at a cost savings,” said Freeholder Thomas A. Arnone, liaison to the county office of Shared Services. “By providing direct dispatch of resources, response time is reduced, and, as with all emergencies, every second counts.”

Unlike a single radio frequency system, the public safety center has an interoperability network system which provides all county and local first responders the ability to communicate with each other during large scale incidents.

“The implementation of this new technology that unites local and county agencies through data and voice communications post Superstorm Sandy and Hurricane Irene, makes Monmouth County fully equipped and prepared in ensuring the safety of our residents during emergencies and large scale incidents,” said Sheriff Golden.