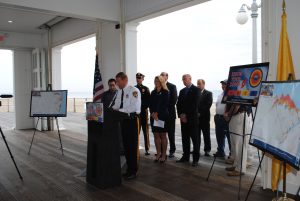 Avon-by-the-Sea: As the Monmouth County Sheriff’s Office, Office of Emergency Management continues to recognize National Preparedness Month and close in on the fourth anniversary of Superstorm Sandy, a new tiered coastal evacuation plan called KNOW YOUR ZONE, was unveiled in Avon-by-the-Sea on Sept. 27. The  plan identifies specific coastal evacuation zones  (A, B, C and D) which helps emergency management officials target evacuation orders to those areas that are at the most risk, based upon threat, strength, direction and forecasted storm surge. The public outreach and educational program, Know Your Zone, is designed to educate residents, businesses and visitors on the coastal evacuation zone in which they live, work or vacation.

“As Monmouth County continues to lead the way in storm preparedness, and build upon the lessons learned from Superstorm Sandy, this program was essential to develop in an effort to maintain the utmost safety when dealing with a major storm,” said Sheriff Shaun Golden. “KNOW YOUR ZONE, which is the first program of its kind in New Jersey, directs evacuation orders to those who are at the greatest risk of being impacted by storm surge and flooding, the deadliest components of coastal storms.”

The tiered system creates 4 distinct zones A, B, C, & D and will allow for a clearer and more decisive messaging, when evacuations are needed.  As the public becomes aware of which zone they are in, evacuation messaging will be directed toward a specific zone.

“For example, eventually it could be announced that all residents and businesses in  Zone A are under a special evacuation order, whether it be voluntary or mandatory, all depending on a storms forecast,” said Mike Oppegaard, OEM Coordinator. “These zones have been created by various hypothetical storm models based on worst case scenarios and should not be confused with flood zones as established by National Flood Insurance Rate Map.” 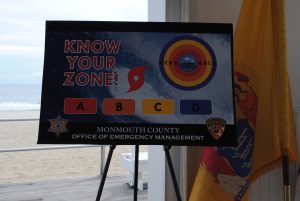 The creation of the tiered coastal evacuation plan also reflects the decision of the National Hurricane Center to separate the association of storm surge inundation from the category of the storm.  Additionally, it provides emergency management coordinators  with specific population demographics, such as the number of properties, estimated population, estimated number of household pets and includes the residents with access and functional needs who have signed up for the Register Ready program.

“I am proud to be a part of the unveiling of another program that enables residents to obtain vital  information they need prior to a storm,” said Deputy Freeholder Director Serena DiMaso, liaison to OEM.  “The program is also critical in guiding our continuing evacuation shelter planning, because we will have a better understanding of what the impact of an evacuation order will have on a shelter operation.”

The plan was developed to provide evacuation planning and guidance to emergency management partners for major coastal events resulting from both tropical cyclones and extra-tropical storm events or Nor’easters. It outlines a tiered approach based on potential inundation areas in order to assist in evacuation decision making and the allocation or high water response assets.

As this campaign moves forward there are four things that people need to remember or understand with this program:

In addition, the Coastal Evacuation Plan along with the Know Your Zone campaign will not only  increase our preparedness and response to storms, but by taking a few extra steps, municipalities will also be able to gain additional Community Rating System points, which helps to reduce flood insurance premium costs, a direct benefit to the tax payers.

People can learn which zone they are located in by visiting the website at: https://www.mcsonj.org/knowyourzone. Once at this site, simply insert your complete address in the Find Your Zone here tab. After doing so, return to the main page and print your specific zone flyer. The zone flyer contains specific information about the program and actions you should take if and when you are told to evacuate.

For a downloadable version of this press release, click here:  News-Release-Monmouth-Co-Unveils-KNOW-YOUR-ZONE