“We are grateful to have Gunner as part of our K-9 Unit,” said Sheriff Shaun Golden. “He comes to us with impressive credentials and will be a tremendous asset in providing vital se 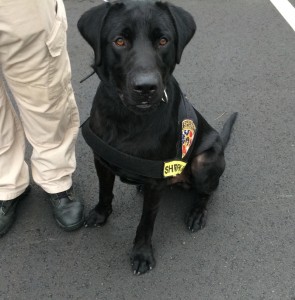 rvices to Monmouth County and local law enforcement agencies when it comes to combating the proliferation of narcotics in the county.”

Gunner, who is one year and eight months old and hails from Texas, was trained by the renowned USK9 Dog Training Academy in Louisiana after being hand selected for the intensive program. He was trained through tracking scent, using actual odors, and can detect methamphetamines, cocaine, heroin, marijuana and ecstasy. Sheriff’s Officer Kurt Kroeper, a trained K-9 instructor, is Gunner’s handler.

“Gunner’s primary role will be to assist in narcotics investigations,” said S/O Kroeper. “I look forward to working with Gunner in the months and years ahead and have no doubt that he will be an outstanding partner in the fight against crime.”

K-9 Gunner cost $8,900. He was purchased through forfeiture funds and the generous donation of $5,000 made to the sheriff’s office from the 200 Club of Monmouth County.

The 200 Club, which provides families of law enforcement members who died or were injured in the line of duty with financial and emotional support, donated the money to purchase a new narcotics dog after S/O Kroeper’s beloved K-9 Evan, died of cancer in 2014. Together, the K-9 team seized an excess of more than $1.1 million in cash which was a result of many drug investigations. The team also located numerous amounts of narcotics which led to the arrestsof hundreds of individuals.

“The passing of K-9 Evan was not just a loss to our agency, but to the entire county,” said Sheriff Golden. “These funds have been well spent with the replacement of a new narcotics detection dog. We are grateful to the 200 Club of Monmouth County for the generous donation. As a result, K-9 Gunner will help continue to rid the streets of drugs and maintain public safety.”