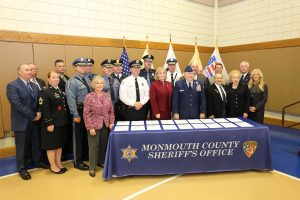 Freehold: Sheriff Shaun Golden proudly hosted the Patriot’s Pride ceremony on December 7, the 75th Anniversary of Pearl Harbor. The event honored men and women of the armed forces, particularly employees of the Monmouth County Sheriff’s Office and Monmouth County’s municipal and county law enforcement agencies.  These law enforcement/citizen soldiers serve as role models for those with whom they serve and show exemplary support, commitment and dedication to the military. The program was led by Sheriff Golden, Lt Governor Kim Guadagno, members of the Employer Support of the Guard and Reserve, the New Jersey Department of Veterans Affairs and the Monmouth County Police Chiefs Association. It was attended by more than 100 people and included law enforcement officials and members of the armed forces throughout Monmouth County.

“I’m honored to co-host this ceremony on the day that our nation remembers those who gave so much, during the attack on Pearl Harbor,” said Sheriff Shaun Golden. “It’s vital that we continue to provide support and a strong commitment to our citizen soldiers in the National Guard and Reserve especially when engaged in responding to emergencies on the home front or deployed oversees in service of their country. They sacrifice everything to keep us safe and it’s our duty to our nation to strongly support them and their family members.”

ESGR coordinates these events throughout New Jersey and works with employers in an effort to support and value the military service of its employees and to ensure that reservists and National Guard members can return to their jobs from active duty.

“We must never waiver in our commitment to honoring the service and sacrifices these brave men and women make on behalf of our nation,” said Lt. Governor Guadagno. “They fought for our freedom; they should not have to fight for a job.”

During the ceremony, Distinguished Service Medals from the NJ Department of Military and Veterans Affairs were presented to veterans from the sheriff’s office. Sheriff Golden, whose agency currently has 18 active members of the military, along with members of Neptune and Ocean Township Police Departments received ESGR awards for their support of the National Guard and Reserves. Certificates of appreciation were also presented to veterans who did not serve in a combat theater, but served NJ honorably during their military service. In addition, 49 police departments in Monmouth County have signed statement of supports for the National Guard and reserve which symbolizes a show of solidarity for members of the armed forces in their departments. As a result, Monmouth County now has the distinction as the only county in New Jersey to achieve 100% support for our military heroes in blue.

“Some people live an entire lifetime wondering if they have made a difference.  A veteran or police officer doesn’t have that problem,” said Norm Paten, Employer Outreach Dir., ESGR.

While performing military service, Monmouth County employees receive full pay for 90 days, and, after that time, they receive the difference in pay between the employee’s regular earnings and the military base pay for active duty.

Families continue to maintain health benefits, and the Monmouth County Sheriff’s Office actively supports families who have to endure hardships when their loved ones are away. 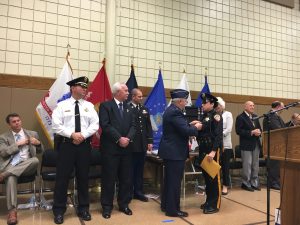 “I’m honored to have spoken at such an important event,” said Freeholder Lillian Burry. “It reinforces our dedication, support and long term commitment the sheriff’s office and the Monmouth County Board of Chosen Freeholders have to our citizen soldiers before, during and after their tours of duty.”

“Our armed forces are critical to our nation’s defense and therefore it’s critical we support them for the heroic efforts in keeping our country safe,” said Prosecutor Christopher Gramiccioni. “Being a naval officer and the Monmouth County Prosecutor, I honor the sacrifices our armed forces make and the continued support Monmouth County provides.”

At the conclusion of the ceremony, Sheriff Golden proudly unveiled the newly created Monmouth County Sheriff’s Office Wall of Heroes, which includes names of all known department veterans and present members of the armed forces.

For a downloadable version of this press release, click here:  News-Release-Patriots-Pride-Event-Recognizing-Leaders-Who-Support-Armed-Forces-on-Pearl-Harbor-Anniv

Constitutional Officers Kick Off Flash and Food Drive This Holiday Season in...
Scroll to top