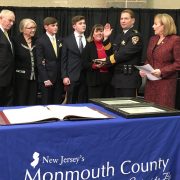 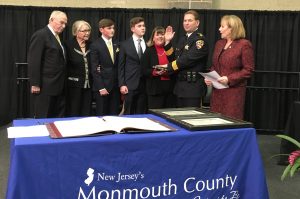 “It is an honor and privilege to have been sworn in as the Monmouth County Sheriff for a third term,” said Sheriff Shaun Golden. “I look forward to serving all who live, work or visit this great county in an efficient and effective manner for another three years. We will continue to dedicate our efforts in fighting crime and focus on homeland security, school safety and the war on drugs, along with many other initiatives, so that Monmouth County  remains the best that it can be.”

Through Sheriff Golden’s leadership skills, public safety initiatives and innovative approaches, the Monmouth County Sheriff’s Office now serves as a model for other agencies to follow. The sheriff has bolstered homeland security issues and counterterrorism efforts with state, county and local law enforcement agencies, to maintain the safety and security of residents and visitors throughout Monmouth County.

He is a leader in the fight against drug abuse and has an integral role in prevention. He continues to address the issue of school violence through consistent active shooter drills and training, and, has established numerous initiatives in keeping our youths and seniors safe. Sheriff Golden’s advanced technological strategies have enabled first responders to operate at a higher level, with the latest public safety software, to ensure the quickest response during emergency situations.  The use of state of the art technology and interoperability have enhanced shared services and provided more efficient and effective services. In addition, the sheriff has been recognized for his extensive public safety outreach programs which are a costs savings to communities, and, he has taken effective steps to cut spending throughout the agency. Sheriff Golden is an advocate for the special needs community by implementing and developing programs for families of children with autism and special needs residents, and, also active in assisting veterans, by providing them access to needed services and programs as well as training them to help in emergency management operations. Furthermore, the Office of Emergency Management continues to lead the way in emergency and disaster response.

“I’m proud of the accomplishments made through the dedicated efforts of all of our employees who faithfully serve the people of Monmouth County,” said Sheriff Golden. “Through such hard work and exceptional drive, the Monmouth County Sheriff’s Office is the only law enforcement agency in New Jersey with accreditations in all five areas of operation, which include law enforcement, communications, corrections, correctional healthcare and public safety training through the Monmouth County Police Academy.”

he sheriff’s office as the undersheriff in charge of the Monmouth County 9-1-1 Communications Center. He was then appointed acting sheriff when former Sheriff Kim Guadagno became New Jersey’s first lieutenant governor. He is a lifelong resident of Monmouth County with  25 years in public safety service, starting out as a police officer with the Colts Neck Police Department before moving on to the Toms River Police Department, in that same capacity.

Sheriff Golden worked as a certified paramedic for MONOC, serving Monmouth and Ocean Counties, and was a volunteer firefighter and EMT. He holds a master’s degree in administration from Seton Hall University, is a NJ Certified Public Manager, and an adjunct professor at Monmouth University.

Sheriff Golden is on the Executive Board of the Constitutional Officer’s Association of New Jersey (COANJ) and served as past President, and, he is on the Executive Board of the Sheriff’s Association of New Jersey (SANJ), where he currently serves as the Secretary. In addition, he is an active member of the National Sheriffs’ Association and serves on the traffic safety and homeland security committees. He has received numerous certifications and awards in community service, incident command, homeland security and emergency management initiatives.

For a Downloadable version of this press release, click here:  News-Release-Shaun-Golden-Sworn-In-To-a-Third-Term-as-Monmouth-Co.-Sheriff-2

Police Recruits Graduate and Embark on a Career in Law Enforcement

Sheriff Golden And Partners In Law Enforcement Participate In Conversation With...
Scroll to top