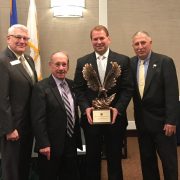 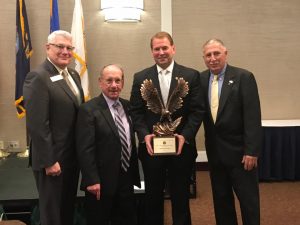 Eatontown: It was a privilege for  Sheriff Shaun Golden  to receive the Mary G. Roebling Distinguished Service Award from the First Region Association of the United States Army, on May 5 at the Sheraton in Eatontown.

Mary G. Roebling was a successful business woman and the first woman to serve as governor of the American Stock Exchange. Her volunteer efforts in support of the US Military began under President Harry Truman as the only woman member of the Citizens Advisory Committee on Armed Forces Training. That dedication continued for the remainder of her life.

“It is truly an honor to receive the award that bears Mary G. Roebling’s name from the Association of the United States Army. An organization that represents the values of military service and supports all aspects of national security while advancing the interests of America’s Army and the men and women who s 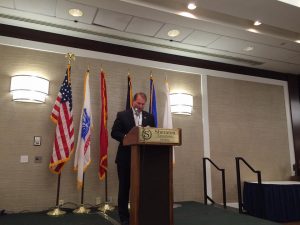 Sheriff Golden accepted the prestigious award on behalf of the men and women of the Monmouth County Sheriff’s Office who have served or continue to serve their country.

The sheriff’s office supports all veterans throughout Monmouth County through initiating numerous programs for soldiers, veterans and service members in all branches of the military.

In Monmouth County we respect, honor and appreciate our veterans and those presently serving.

For a downloadable version of this press release, click here: Sheriff-Receives-Prestigious-Award-for-Dedication-to-Military