Monmouth County Sheriff Shaun Golden continues to make the safety of children a priority. The agency’s bilingual Dangers of Strangers program, which makes students aware of the Dangers of Strangers in their communities and elsewhere, was presented to students at the Midtown Community Elementary School in Neptune on Oct. 3. The program which was presented in conjunction with Hispanic Heritage Month, helps maintain the safety of children and keep them out of harm’s way.

“The safety and security of our children remains a principle concern for my agency,” said Sheriff Shaun Golden. “That’s why it is vital that children are made aware, and often reminded, about the dangers of strangers. Strangers have a way of luring children into harmful, or possibly fatal, situations through bribes and false claims such as a family emergency, a fake injury or a lost pet.” 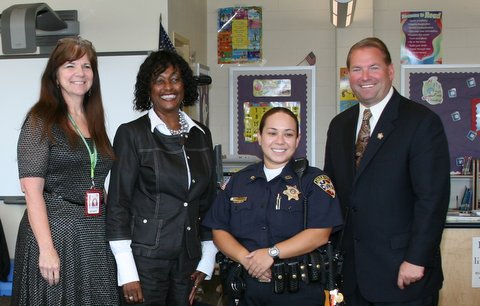 The 45 minute program, which was presented in English and Spanish versions to students from kindergarten through second grade, teaches them what to do if a stranger tries to engage them in conversation, whether on the street, on the telephone, when home alone or on the internet.

“As with all districts, the safety of students is a priority throughout the Neptune Township Schools. Having this program is of great value to all of our elementary school students and their parents, particularly those from our ESL program (English as a second language), who could be perceived as more vulnerable, because of a language barrier,” said David Mooij, Superintendent of Neptune Schools.

Along with the Dangers of Strangers, other bilingual programs being offered through the Monmouth County Sheriff’s Office are Identity Theft, Youth Identification and Safe Cargo.

“Our agency is a leader when it comes to supporting issues and implementing bilingual programs in the Hispanic community,” said Sheriff Shaun Golden. “I’m proud to have the opportunity to mentor our Hispanic youths in an effort to ensure safety and opportunity for them in the future.” 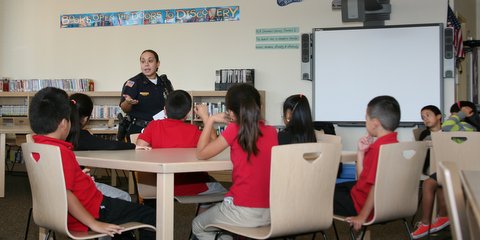