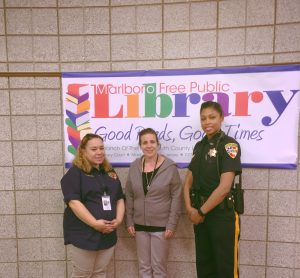 “The safety and security of our children remains a principle concern for my agency,” said Sheriff Shaun Golden. “That’s why it is vital that children are made aware, and often reminded, about the Dangers of Strangers. Strangers have a way of luring children into harmful or possibly fatal situations through bribes and false claims such as a family emergency, a fake injury or a lost pet.”

Sheriff’s Officers Michelle Melendez and Iliana Santos presented the 45 minute program to more than 50 children and parents who attended.  It teaches children what to do if a stranger tries to engage them in conversation, whether on the street, on the telephone, when home alone or on the internet.

In addition, they learn how to report suspicious activities to local law enforcement by calling 9-1-1.

For a downloadable version of this press release, click here:  News-Release-Dangers-of-Strangers-Marlboro