Sheriff Shaun Golden is committed to having public safety telecommunicators from the Monmouth County 911 Communications Center at the forefront when it comes to autism awareness. On April 1, which marks the beginning of Autism Awareness Month, 12 operators were trained on how to prepare themselves when responding to calls involving individuals with autism spectrum disorder (ASD).

“As we recognize Autism Awareness Month and National Autism Awareness Day on April 2, it’s vital to note that the law enforcement community is committed to acknowledging this disorder throughout the year,” said Sheriff Shaun Golden, a board member of the Monmouth Ocean Foundation for Children. “Through attentive training, our public safety telecommunicators become equipped with information on autism to effectively assist a caller and prepare first responders on the emergency.” 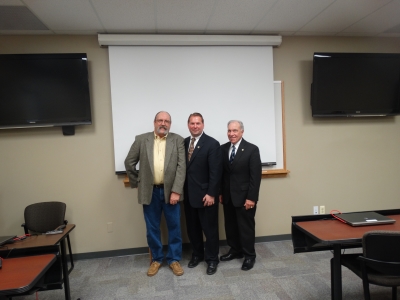 Public safety telecommunicators from the Monmouth County Sheriff’s Office Communications Division were the first group of operators in the state to be trained on how to prepare themselves when responding to calls involving individuals with ASD. The training program began in 2011 and is conducted by Fran Hines, an autism awareness trainer with the New Jersey Department of Health, and, a parent of an autistic child.

According to recent statistics from the Centers for Disease Control, it’s estimated that one in 68 children in multiple communities in the Unites States has been identified with ASD. Furthermore, the report stated, in New Jersey, one in 45 children were identified with ASD.

“The increase of our autistic community has ultimately resulted in an increase of law enforcement and first responder contacts, and that begins with 9-1-1 operators who take the call. That is why it’s vital they are equipped with the right information.”

Through the training course, operators are briefed on what questions need to be asked when dealing with an emergency situation regarding an individual with ASD. Those questions include if the individual is verbal or non-verbal, how he or she interacts with people, what if any unusual behaviors does the individual have, has the individual wandered off before, and, if so, where? Individuals with ASD often gravitate towards water, and, drowning is the leading cause of death among that population. Once that information is gathered by the operators, they will pass it to responding agencies on how best to approach the situation, as well as decide if additional first responders need to be dispatched. They can also inform parents about Project Lifesaver, an electronic monitoring program for individuals with ASD and Alzheimers. Project Lifesaver is a partnership between the Monmouth County Sheriff’s Office and the Monmouth County Office on Aging.