Freehold: Sheriff Shaun Golden is pleased to announce that the Monmouth County Sheriff’s Office is among one of the first law enforcement agencies in the county to become equipped with Narcan. Beginning, May 29, Naloxone, also known as Narcan, a nasal spray that counteracts the effects of a heroin overdose, will be carried by trained sheriff’s officers and administered to individuals in emergency situations.

“The availability of Narcan to first responders is a major step forward when it comes to addressing the heroin epidemic that plagues Monmouth and Ocean counties,” said Sheriff Shaun Golden. “I commend the Monmouth and Ocean County Prosecutor’s Offices for leading this movement, and, would especially like to recognize Ocean County Prosecutor Joseph Coronato for bringing this innovative program to the forefront several months ago. I look forward to working with him and Acting Prosecutor Christopher Gramiccioni in the continued efforts of the fight against drug abuse and addiction.”

The initiative comes after Gov. Chris Christie launched a pilot program in Ocean and Monmouth counties that trains and equips first responders to administer Narcan. 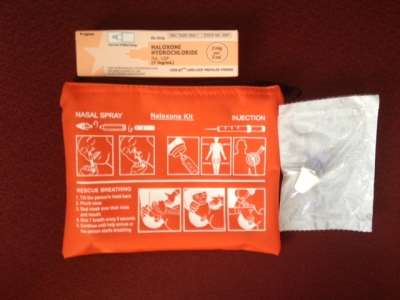 Sheriff’s officers were trained by the Monmouth County Prosecutor’s Office which has also supplied and funded the initial Narcan kits.

The Monmouth County Sheriff’s Office must follow standard procedures through the pilot program in which a Narcan coordinator designated by the sheriff’s office must ensure the following:

“In addition to our participation in the Narcan program, the Monmouth County Sheriff’s Office through the National Prescription Drug Takeback Initiative, continues to be a leader in decreasing prescription drug abuse, which can lead to other dangerous drugs such as heroin,” said Sheriff Golden. “It’s our hope that through this dedication and these efforts, lives will be saved and the drug abuse problem will experience a downward trend.”