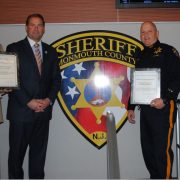 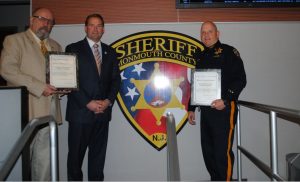 Freehold: Sheriff Shaun Golden is honored that the Monmouth County Sheriff’s Office was recently recognized by Project Lifesaver for locating a missing nine year old girl. The incident took place on New Year’s Day, 2017 when the Monmouth County 9-1-1 Communications Center was notified that a young girl, who is a participant on the Project Lifesaver Program, went missing from her foster home. Sheriff’s Officer Kurt Kroeper and Autism Awareness Coordinator Fran Hines immediately responded and tracked the individual through Project Lifesaver equipment, which emits radio signals. Once the girl was located, she was safely returned to her residence.

“This incident reinforces the significance of the Project Lifesaver Program and what a critical tool it is when locating a missing individual,” said Sheriff Golden. “I’m proud the sheriff’s office was recently recognized, as attention is drawn to this disorder during National Autism Awareness Month, and, pleased we can offer such a valuable service for people to utilize. Project Lifesaver benefits individuals greatly by the safety and security it provides through participation in the program.”

Since the program’s implementation in 2003, Monmouth County has had eight rescues of individuals who have wandered. The partnership between the Monmouth County Sheriff’s Office and the Monmouth County Office on Aging was initially funded through the purchase of equipment made possible through a grant from the Older Americans Act.

The program was expanded to include individuals with autism in 2007 with the Monmouth County Department of Human Services joining the partnership.

Currently, there are 160 individuals on the Project Lifesaver program, with 113 juveniles and 47 adults in Monmouth County. Each radio transmitter worn by an individual has a unique frequency.

Should the client become missing, the sheriff’s office has five receivers with which to track the missing individual. The range for the radio receiver is one mile on the ground, one quarter mile when roof mounted and five to seven miles in a helicopter.

Autism Awareness Coordinator Fran Hines of the Monmouth County Sheriff’s Office initiates the applications for autistic individuals, and, senior citizen enrollments are processed through the Monmouth County Office on Aging. Both Hines and sheriff’s office personnel visit the residence of individuals, teach the family about Project Lifesaver and install the wristlet (transmitter). They return in either 30 or 60 days, depending on the model of the transmitter, to change the batteries and check on the condition of the client.

“I’m proud of the commitment the sheriff’s office has made when it comes to leading the way in autism awareness and Alzheimer’s disease,” said Fran Hines, who also trains members of law enforcement and public safety telecommunicators on how to respond to individuals with autism. “Every second counts when a recipient on Project Lifesaver goes missing. That’s why quick and responsive actions from law enforcement through Project Lifesaver to locate a missing individual, is vital.”

According to Project Lifesaver, the program is in fifty U.S. states with over 1,500 member agencies participating.

“Even though we recognize National Autism Awareness Month throughout April, it’s vital to note that the law enforcement community is committed to acknowledging this disorder as well as Alzheimers all year through such useful programs, in an effort to maintain the safety of individuals and spare families a lot of anxiety when locating or responding to a loved one’s needs,” said Sheriff Golden.

For a downloadable version of this press release, click here:  News-Release-MCSO-Receives-Recognition-for-Project-Lifesaver-Rescue

Sheriff Golden And The Board Of Chosen Freeholders Commemorate Public Safety...
Scroll to top