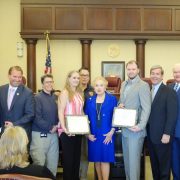 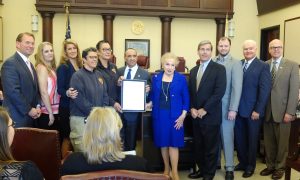 “This week is a great opportunity to say thank you to all the public safety telecommunicators for their hard work and commitment in maintaining public safety,” said Sheriff Golden. “These dedicated men and women play a critical role in saving lives, and all too often that work goes unnoticed.”

To celebrate the week, held from April 9 through April 15, Freeholder Director Lillian G. Burry presented a proclamation to the Monmouth County Sheriff’s Office, recognizing the PSTs, at the most recent Board of Chosen Freeholder meeting. SPST Jill Jarrett, Jackson, PST Galen Baker, Neptune and PST Heidi Stearns, Freehold, accepted the proclamation on behalf of the Communications Division. SPST Jarrett was recognized for 30 years of service and PSTs Baker and Stearns were recognized for their perfect attendance in 2016. The Monmouth County 9-1-1 Communications Division, which is staffed with 104 public safety telecommunicators, provides 9-1-1 services to 46 municipalities and two government installations and dispatches for 127 agencies which include police, fire and EMS. 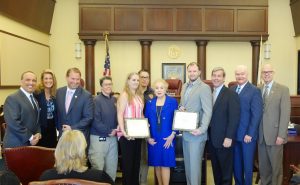 “These men and women do an exceptional job serving Monmouth County 24 hours a day, 7 days a week, and deserve much credit for their dedication and professionalism,” said Freeholder Director Lillian G. Burry, liaison to the Monmouth County Sheriff’s Office.

For a downloadable version of this press release, click here:  News-Release-MCSO-Commemorates-Public-Safety-Telecommunicators-Week