Neptune: Sheriff Shaun Golden’s Inmate Labor Program was in full operation assisting with the Shark River fish kill. On May 15 and 16 several inmate labor crews were transported to Neptune, Belmar and Spring Lake from the Monmouth County Correctional Institutional to help with the major cleanup of the thousands of fish that died in the Shark River and washed ashore this week. The Monmouth County Sheriff’s Office Inmate Labor Program offers much needed assistance to towns, and helps lessen financial burdens they face due to budget constraints.

“The use of our Inmate Labor Program to assist with a cleanup of this magnitude is invaluable, and I’m glad the sheriff’s office is able to provide this resource to the shore communities during such a critical time,” said Sheriff Shaun Golden. 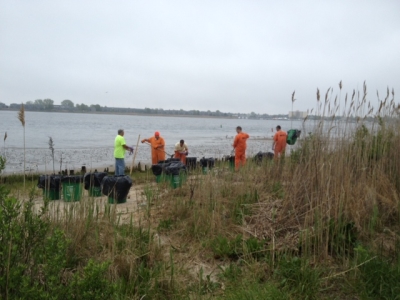 The Sheriff’s Office transports and provides the security of the inmate labor crews. Requests for inmate labor teams are made to the program coordinator, Medora Morris, and are evaluated in terms of the needs and feasibility of the project.