Sea Bright: Sheriff Shaun Golden is pleased to announce that the Monmouth County Sheriff’s Office Inmate Labor Program is back in full operation in an effort to help restore shore towns and communities after the rough winter. Five inmates from the Monmouth County Correctional Institution spent the week of April 7 in Sea Bright where a major cleanup was conducted. Storm drains which were loaded with sand were cleared, grass was planted by the berms on the beach and fencing was put up in nearby areas. The effort was to clean up what the harsh winter left behind and assist in preparing the beachfront for the upcoming season. 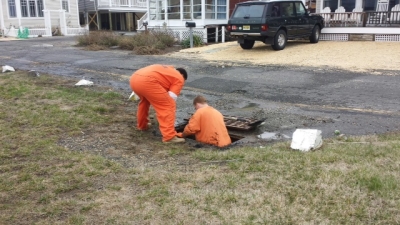 “I’m glad the sheriff’s office is able to provide such a valuable resource through our Inmate Labor Program,” said Sheriff Shaun Golden. “The use of inmate labor to assist the Borough of Sea Bright, as it continues to recover from remnants of a rough winter and the devastating effects of Superstorm Sandy, is a cost savings example of shared services.”

“We are grateful to have the Inmate Labor Program back here in Sea Bright,” said Mayor Dina Long. “This program is a great service in assisting us with cleanup and recovery efforts as we prepare for the summer season.”

Last year, 1,260 hours were dedicated to working on a range of projects through the Inmate Labor Program. The Monmouth County Sheriff’s Office transports and provides the security of the inmate labor crews. Requests for inmate labor teams are made to the program coordinator, Medora Morris, and are evaluated in terms of the needs and feasibility of the project.

“The use of inmate labor to assist with cleanups, beautification projects and storm damage recovery not only helps towns save money on labor, but also assists the work crew in giving something back to society. I’m pleased we are able to provide such assistance,” said Sheriff Golden.

Past inmate labor projects have included cleanup from storm damage recovery, carpentry, painting, working with parks and public works departments and the restoration of historic sites.