Neptune: Monmouth County Sheriff Shaun Golden wants students of all ages to be aware of the risks and negative impacts that come along with joining a gang. The Monmouth County Correctional Institution’s Gang Intelligence Unit travels to high, middle and elementary schools to provide students and faculty with a realistic look into a gang member’s life and why becoming a part of a gang is a bad decision. On April 9, two separate programs were presented to students and faculty from Neptune High School.

“Joining a gang is an enormous error in judgment, which can lead to jail, injury or even death,” said Sheriff Shaun Golden. “Youths are being recruited at seven or eight years old. That’s why gang prevention and awareness needs to start at an early age and continue to be reinforced throughout the years in an effort to reduce the impact street gangs have in our neighborhoods.”

Each school gang presentation is tailored and modified for the students at the school at which the program will be conducted. 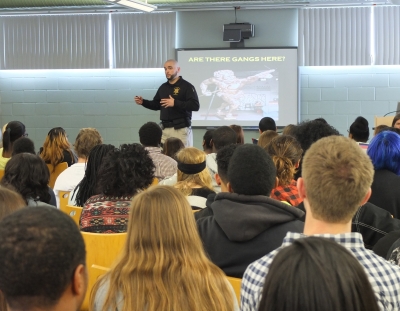 Because members of MCCI’s Gang Intelligence Unit deal with incarcerated gang members daily, the information they gain inside the jail is applied to school programs, since it reveals which gangs are prevalent in various areas throughout Monmouth County.

Prior to the presentation at Neptune High School, the Gang Intelligence Unit, which is comprised of three corrections personnel, scouted the area to determine if there was a gang presence nearby.

During the presentation to the students, the different types of gangs were discussed and how a large percentage of all violent crimes are connected to gangs. The Gang Intelligence Unit displayed the clothes that correctional inmates wear, the food they eat and newspaper clippings of gang members who were sentenced to life in prison. The students were provided with pictures of gang members who were slashed, and a video illustrating the grim consequences gang members face from other gangs or even from members of their own gang.

After the student presentation, the Gang Intelligence Unit met with the faculty and provided them with a similar gang program. They shared the information of gang markings in the school area and made them aware of the characteristics of at-risk students, which may include family issues, lack of knowledge about the dangers of gangs, peer pressure, sense of belonging and power, low self-esteem and the need for attention, friendship and protection.

“I commend the Monmouth County Sheriff’s Office Correctional Division for providing such a valuable program to our students and faculty,” said Richard Allen, Principal of Neptune High School. “These presentations have a profound effect on our students which will hopefully make them think twice about joining a gang or becoming associated with one.”

According to the most recent New Jersey State Police Gang Survey, Monmouth County has the second highest number of gangs in the state, with 132 different gangs, just behind Essex County, with 166.

“Although violence is more prevalent to inner cities, gangs are not exclusive to those areas,” said Sheriff Golden. “Education and awareness may begin in schools but it can’t end there. Parents must be aware of the problem and communicate with their children about the consequences of belonging to a gang.”