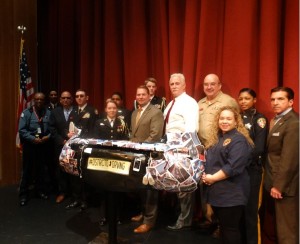 Neptune Township: Sheriff Shaun Golden wants students who are about to get their driver’s license and take to the roadways, to stay safe. In conjunction with April being Distracted Driving Awareness Month, the program, called “Distracted Driving-Seconds that Could Change or End Your Life” was conducted by the Monmouth County Sheriff’s Office at Neptune High School on Wednesday, April 6. 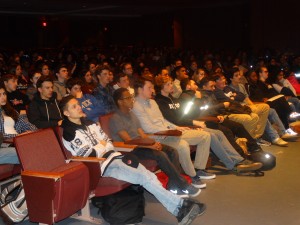 e program was presented by Sheriff’s Officers Iliana Santos and Michelle Melendez to high school students at Neptune High School. During the one hour presentation, distracted driving was explained along with the types of distracted driving such as texting and talking on cell phones, eating, drinking, reading and grooming, among other activities. In addition, several compelling videos, detailing the aftermath of distracted driving were graphically illustrated. At the conclusion of the presentation, students had the opportunity to ask questions and were left with the advice to share the information they obtained with others.

“This is a valuable presentation that could very well save the life of a driver and I’m glad our students had the opportunity to witness how dangerous distracted driving can be,” said Principal Richard Allen. “I commend the Monmouth County Sheriff’s Office for its commitment to this serious safety issue. Together we can help decrease distracted driving activities by proactively stressing to teens the safety of driving.” 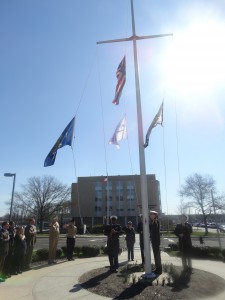 In addition to the program and in recognition of the month, a bumper created by students will be on display at various locations in Monmouth County including the Monmouth County Sheriff’s Office, called U Got Brains, which draws attention to this serious issue of texting and driving.

“It’s crucial that students get involved with these projects and programs, and, share the information they learned with their parents, since parents should eliminate distracted driving while operating a vehicle,” said Sheriff Golden. “When a parent is in the driver’s seat, they lead by example, by the manner in which they drive.”

In conclusion to the kick off of Distracted Driving Awareness Month at Neptune High School, a flag was raised by the students who signed it pledging to be safe drivers, not distracted ones.

For a downloadable version of this press release, click here:  News-Release-MCSO-Partners-with-Neptune-HS-to-Kick-Off-Distracted-Driving-Month-in-an-Effort-to-Keep-Young-Drivers-Safe-April-6

MCSO Continues to Lead the Way in Shared Services by Partnering with West Long... Sheriff Golden and the Board of Chosen Freeholders Commemorate Public Safety...
Scroll to top