Freehold: Sheriff Shaun Golden along with the Monmouth County Sheriff’s Office K-9 Unit was honored to have been presented with a check for $5,000 from the 200 Club of Monmouth County on Tuesday, July 8. This generous donation comes in the wake of K-9 Evan’s passing on June 27. Evan, a seven year old Labrador retriever was a member of the Monmouth County Sheriff’s Office K-9 Unit, who specialized in narcotics detection and was the beloved partner of Sheriff’s Officer Kurt Kroeper. “Our agency is extremely humbled by this charitable gesture and would like to thank the 200 Club of Monmouth County for its generosity,” said Sheriff Shaun Golden. “K-9 Evan was a tremendous asset in the fight against drugs. That effort of ridding the streets of drugs, which plague our county, will continue through our K-9 unit, since the funds will be used to purchase a new narcotics detection dog.” 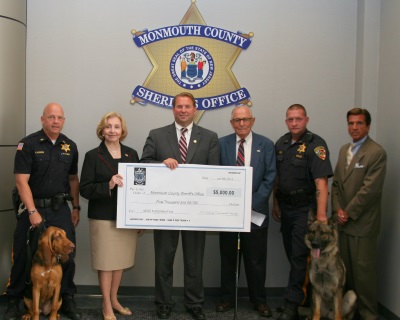 The 200 Club of Monmouth County provides family of law enforcement members who died or were injured in the line of duty with financial and emotional support. The organization is comprised of leaders in business, public service, education and other professions. The $5,000 check that was presented will go directly to the Monmouth County Sheriff’s Office K-9 Donation Fund. “We were saddened to learn about the loss of K-9 Evan who played a vital role in maintaining public safety,” said M. Claire French, President of the 200 Club of Monmouth County. “It’s our pleasure to donate these funds which will help ensure that our residents and law enforcement agencies continue to be served well.”

Throughout their course of work, S/O Kroeper and Evan seized an excess of more than $1.1 million in cash, a result of numerous drug investigations. The K-9 team also located a significant amount of narcotics including heroin, cocaine and marijuana, which led to the arrests of hundreds of individuals.

“I commend the 200 Club for its support of the Monmouth County Sheriff’s Office K-9 Unit,” said First Assistant Monmouth County Prosecutor Marc LeMieux. “The K-9 unit assists our agency on many investigations and plays a vital role in protecting the public and continuing in the fight against drugs.”

If anyone would like to make a donation to the MCSO’s K-9 Unit, checks can be made payable to the Monmouth County Treasurer and sent to 2500 Kozloski Rd., Freehold, N.J. 07728, with a letter indicating the funds are for the MCSO K-9 Donation Fund. The sheriff’s office K-9 donation fund was established in 1997, after the Monmouth County Sheriff’s Office lost one of its own, K-9 Solo. Solo, a German shepherd, was shot during an attempted apprehension of a wanted individual.

Due to covid-19 many Veteran events have been postponed or cancelled . We will post updates from  Veteran organizations as they’re received. Please check the website regularly for new events

Due to conditions created by the COVID 19 Pandemic, and the social distancing requirements, plus the logistics and extraordinary safety measures that would be required to successfully and meaningfully facilitate the program, Sheriff Youth Week has been cancelled for 2020.

All classes are cancelled until
further notice.  Please check back soon for updates.