West Long Branch: The Monmouth County Sheriff’s Office K-9 Unit will continue to fight crime in a safe and secure manner thanks to the members of Alpha Phi Sigma’s Criminal Justice Honor Society from Monmouth University. On March 26, Alpha Phi Sigma presented Sheriff Shaun Golden and the Monmouth County Sheriff’s Office K-9 unit with a check for $300 which will be used toward the purchase of a new K-9 bullet proof vest.

“We are grateful to Alpha Phi Sigma for their dedication to this cause,” said Sheriff Shaun Golden. “These canine teams deal in narcotics and explosives detection as well as suspect apprehension and it’s crucial that they are protected while maintaining public safety.”

The funds were raised through the 3rd annual Paws for a Cause event which was held in February and raises money for a K-9 bullet proof vest. During the event various K-9 demonstrations were held at Monmouth University’s Student Center. 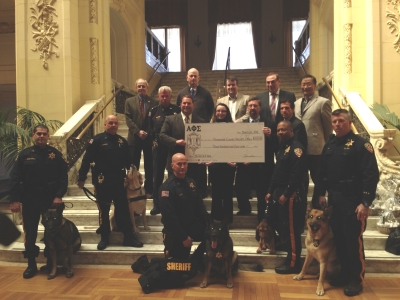 In 1997, the Monmouth County Sheriff’s Office lost one of its own, K-9 Solo. Solo, a German shepherd, was shot during an attempted apprehension of a wanted individual.

“These K-9s risk their lives to protect us,” said Katie Musa, President of Alpha Phi Sigma. “Bulletproof vests are expensive and Alpha Phi Sigma wants to give back and show our appreciation by raising money to vest a canine that needs protection.”
The average cost for a canine vest is $850 dollars. Last year, Alpha Phi Sigma raised 400 dollars for the K-9 Unit. Those funds and the funds collected this year will be used toward the purchase of a vest for a new K-9 which will become a member of the unit once training is complete.
If an individual would like to make a donation to the MCSO’s K-9 Unit, all checks need to be made payable to the Monmouth County Treasurer with a letter indicating the funds are for the MCSO K-9 Donation Fund.

SHERIFF URGES RESIDENTS TO “LOCK YOUR MEDS” AS PART OF PRESCRIPTION DRUG... SHERIFF GOLDEN STRESSES THE IMPORTANCE OF CHILD SAFETY THROUGH SEEK 9-1-1 P...
Scroll to top