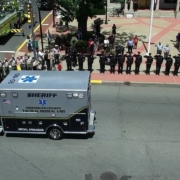 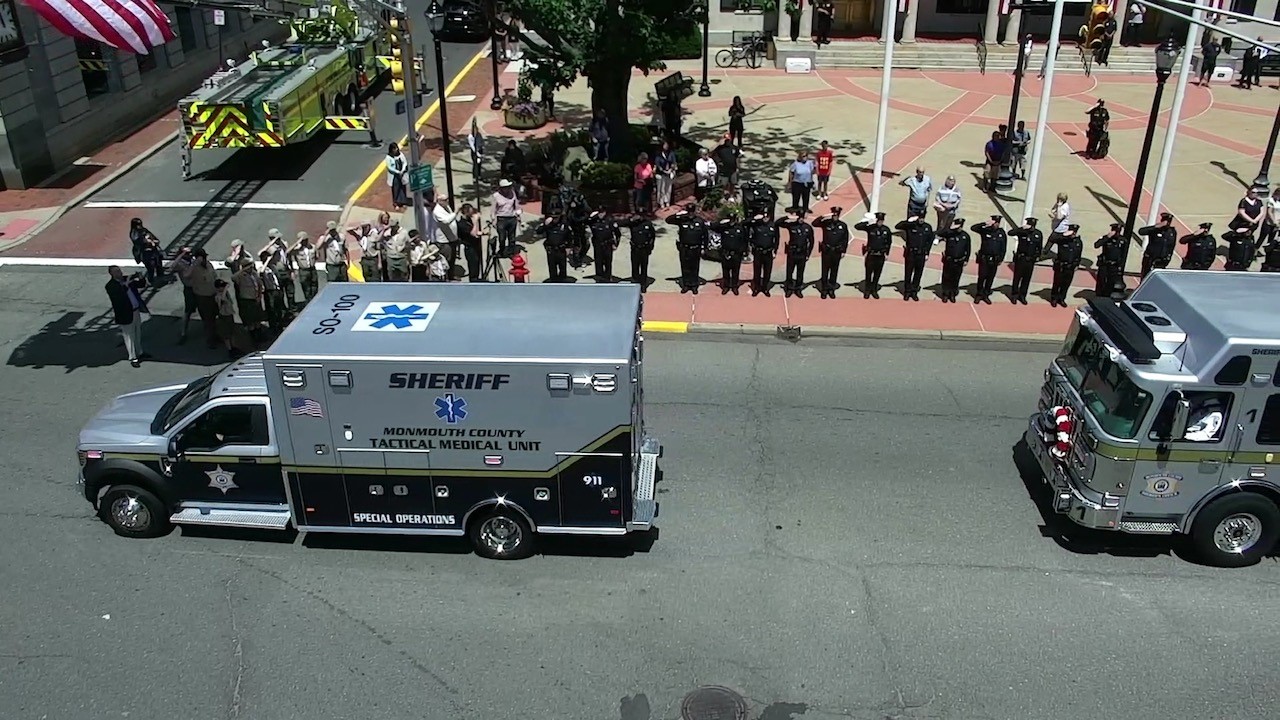 One by one the remains of 23 forgotten veterans and two spouses from WWI, WWII, Korea and Vietnam War eras were carried out from the Manalapan Police Department on June 23, as they began the journey to their final resting place, Brigadier General William C. Doyle Memorial Cemetery in Wrightstown, NJ. This momentous event, Military Honors For Forgotten Veterans, coordinated by the Monmouth County Sheriff’s Office, the Vietnam Veterans of America Chapter 12, the Manalapan Police Department and the Ocean County Sheriff’s Office provided our veterans whose remains were never claimed with a salute to arms and a proper sendoff. 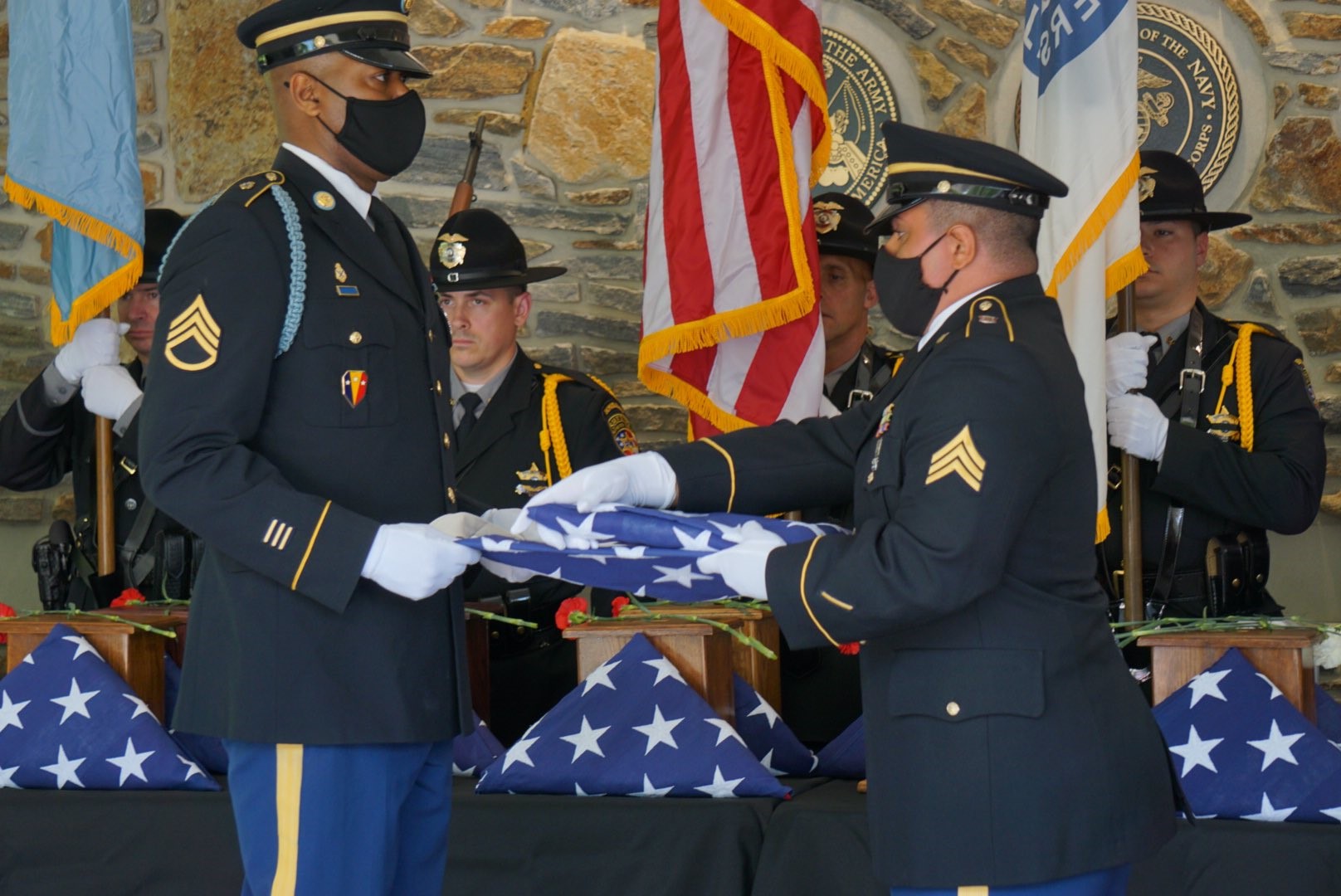 “We could never repay our veterans for the sacrifices they have made, but what we can do is never forget. It’s vital that these veterans who served our country are given respect and provided a proper burial filled with dignity and honor,” said Sheriff Shaun Golden. “The Monmouth County Sheriff’s Office is proud to be a part this significant event and thank the Vietnam Veterans of America Chapter 12 for their commitment and tireless work to ensure these forgotten veterans receive full military honors.”

The Vietnam Veterans of America – Chapter 12’s mission is to identify and claim those cremated remains of honorably discharged veterans and their spouses who have been abandoned and left on shelves in funeral homes. Sadly, there are countless remains of veterans throughout the United States that were never claimed.

VVA Chapter 12 works with funeral homes in Monmouth and Ocean Counties to identify and provide those veterans a proper military interment for which they have earned. To date 90 veterans or spouses have been interred and 23 were returned to family by VVA Chapter 12. 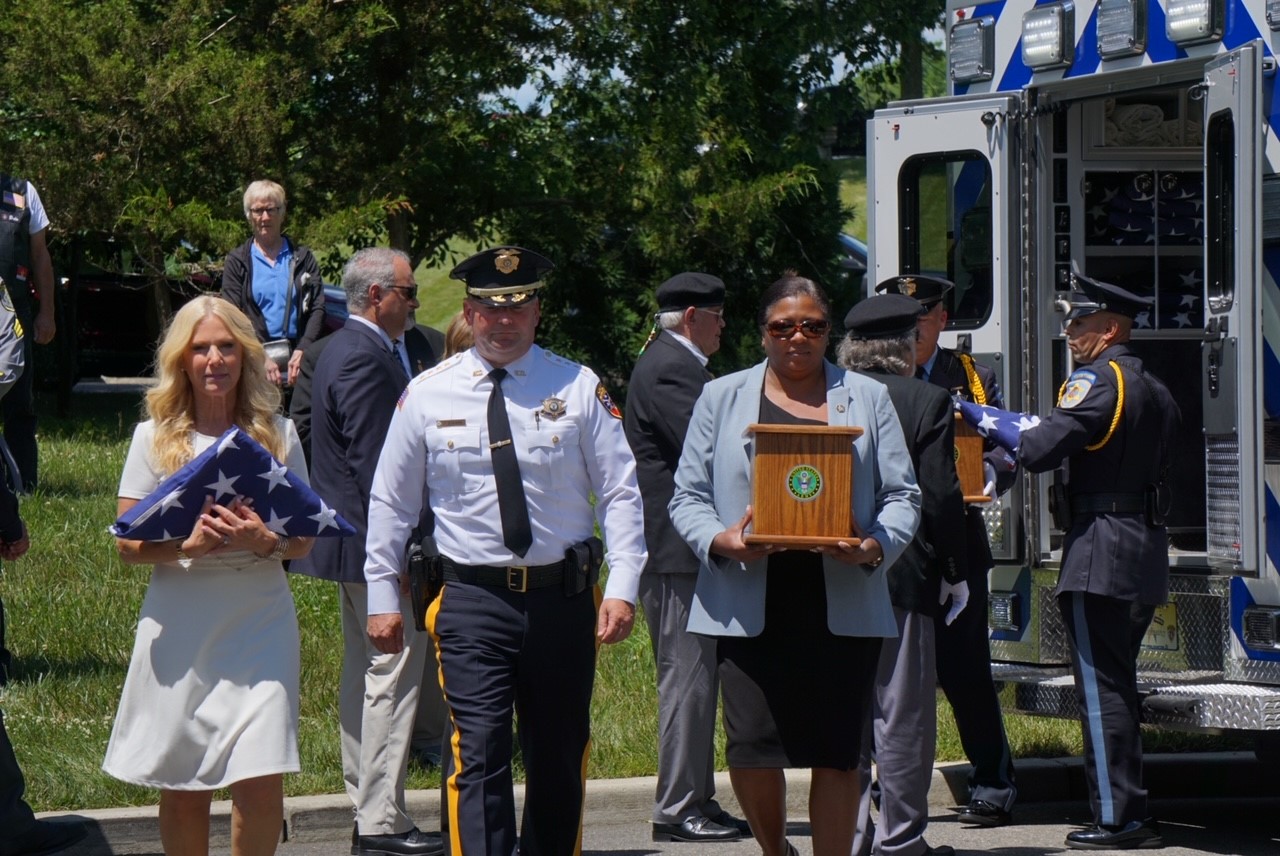 “When I heard about veterans being abandoned on shelves at funeral homes I couldn’t believe it and knew that we had to do something, so it became my mission,” said Ernie Diorio, Vice President of the Vietnam Veterans of America – Chapter 12. “A lot of time and energy is put into this. You need to ensure veterans are honorably discharged, obtain their death and cremation certificates, and have a funeral with full military honors, but the results are extremely rewarding.”

The Military Honors for Forgotten Veterans Ceremony at the Manalapan Police Department where many gathered, had a salute to arms and a reading of the names of the 23 veterans and two spouses. Their urns, with a flag on each one, were placed in a vehicle, which led the procession towards the veterans’ final resting place.

“Mayor Jack McNaboe, a veteran himself and I could not be happier than to have this opportunity to formally show honor and reverence to these deserving veterans.  Hopefully an event like this demonstrates that the men and women who serve and sacrifice for our nation are never forgotten, and that duty, honor and service will be recognized,” said Chief Edward Niesz, Manalapan Police Department. 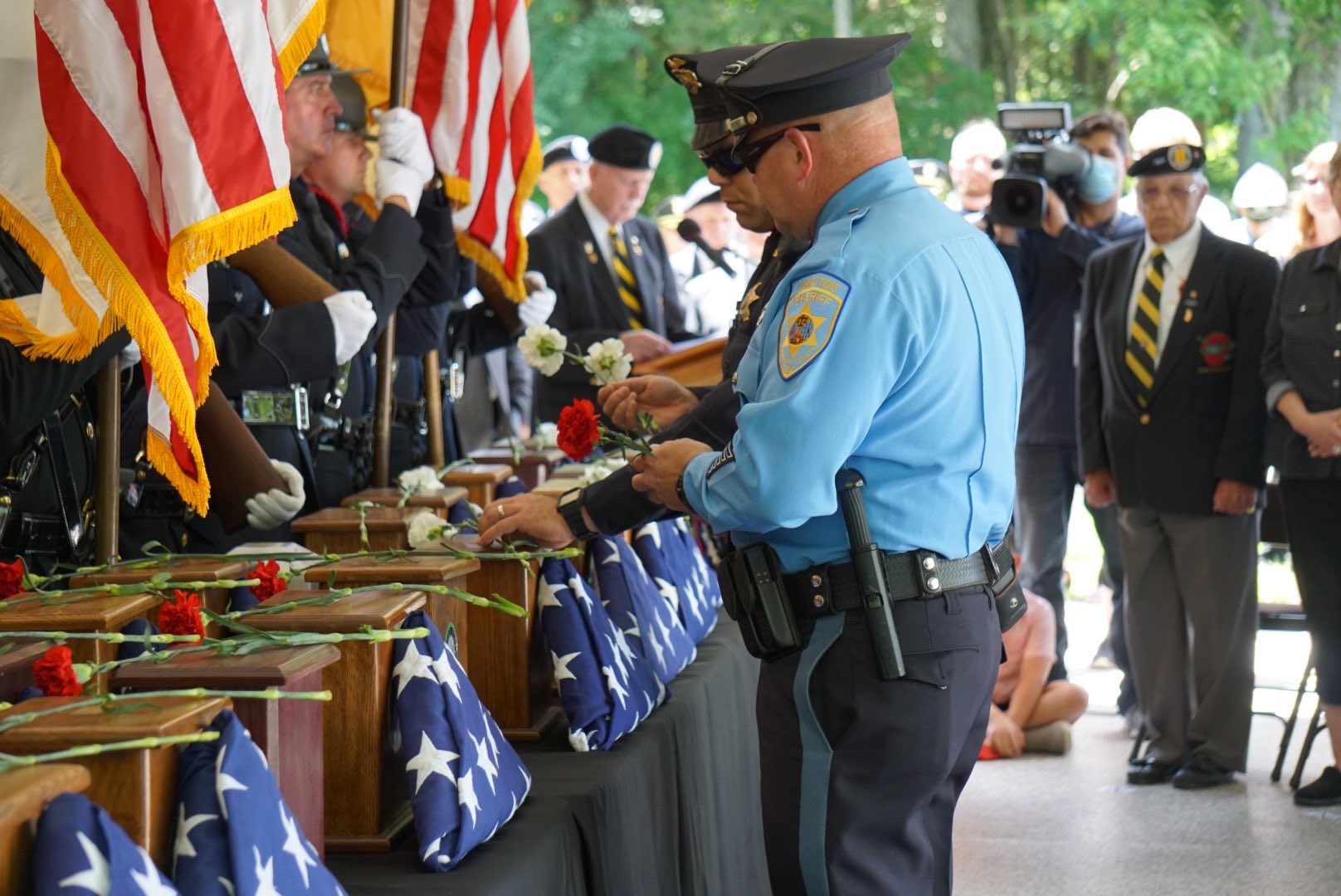 During the procession, three stops were made to pay tribute to the forgotten veterans. Crowds gathered along the route at the Monmouth County Hall of Records, Centrastate Medical Center in Freehold Township, and, with the assistance of the Ocean County Sheriff’s Office, Prospertown Lake in Jackson.

Once the procession reached the Brigadier General William C. Doyle Memorial Ceremony, there was a call to 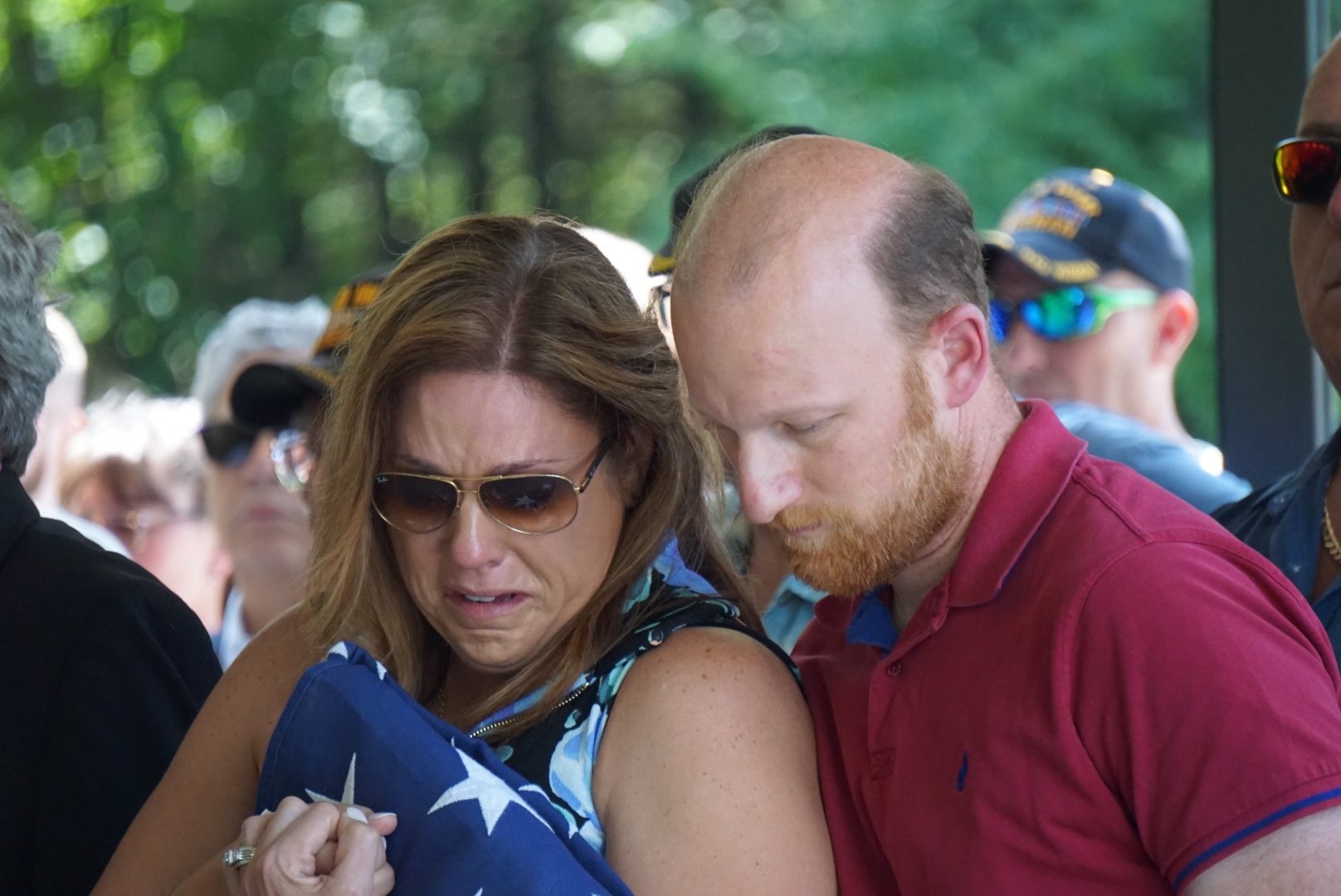 order, posting of colors by the Monmouth County Sheriff’s Office and the Manalapan Police Department’s Honor Guard, a presentation of arms, a prayer to honor our veterans, a flag presentation, taps and the retiring of the colors, prior to the burial.

Also included in the service was a moment of reflection where a bouquet of flowers was presented to family members and a flower was placed on each urn, for the 23 forgotten veterans and two spouses, whose memory will live eternally, as we all remain ever mindful of the sacrifices they made.