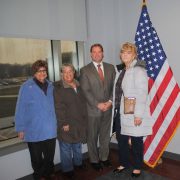 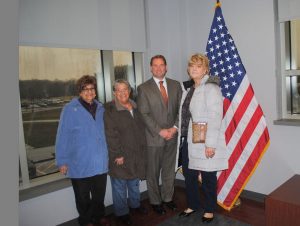 Freehold: It was a trip down memory lane for three retired corrections officers of the Monmouth County Sheriff’s Office – Corrections Division, who reunited at the Public Safety Center in Freehold on March 28, to tour operations and speak of old times.  Sheriff Shaun Golden was proud to greet the former Corrections Officers Judith Krauss, Ann Marie Sousa and Marie Palumbo, three women who worked hard over the years.

“These women were dedicated employees who took pride in their roles as corrections officers at the Monmouth County Correctional Institution,” said Sheriff Shaun Golden. “They worked at the jail prior to it becoming a direct supervision facility, when it was overcrowded and short staffed, yet all three met every challenge with assurance.

C/O Palumbo retired in 2001 and C/Os Krause and Sousa retired in 2011. All three began their careers in the mid-eighties.  At the time, Undersheriff Ted Freeman, who was in charge of administration at the jail was tasked with recruiting 25 officers to work at MCCI.

“Back then, the list was short but several light industries were shutting down operations in Monmouth County,” said Executive Undersheriff Ted Freeman.  “In an effort to broaden our search we held recruitment programs at the sites and hired several of the industrial workers who made the transition to corrections officers. Two made it all the way to retirement, C/Os Sousa and Palumbo.”

During their visit, all three women looked back and spoke about their law enforcement careers with sincerity and fondness, and, say if they had to do it all over again, they would.

For a downloadable version of this press release, click here:  News-Release-Corrections-Officers-Reunite-to-Visit-MCSO-After-Years-of-Retirement