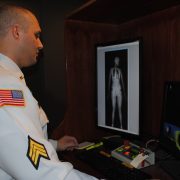 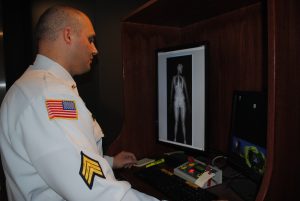 Freehold: Sheriff Shaun Golden continues to lead the way in the ongoing fight against drugs and violence, which includes inside the Monmouth County Correctional Institution, MCCI, as well. MCCI is the first correctional facility in the State of New Jersey to purchase and operate a body scanning device that detects concealed objects internally or externally on the body.

“The main goal of this equipment is to prevent the smuggling of contraband, such as drugs, weapons, cell phones, and smoking devices, into the correctional institution,” said Sheriff Shaun Golden. “It’s a problem all jails face, and one that we are successfully addressing in an effort to  ensure the utmost safety of those whom are sentenced to incarceration in the facility as well as those who work there.”

The B-Scan, manufactured by Smiths Detection, has been in operation at MCCI since November, 2016. An inmate is safely scanned in seven seconds at .25 micro Sieverts. With that type of exposure, which contains radiation equal to the radiation in one banana, an inmate can be scanned, twice a day, nineteen times per week or one thousand times a year.  The machine is not being utilized in lieu of other searches, but in addition to established protocol, which includes a pat search upon entrance to the jail, a hand held metal detector search and a visual check while the inmate is disrobed in the shower area. 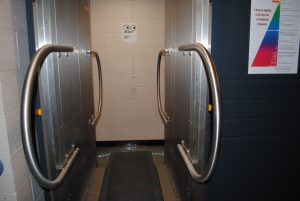 tify contraband inside an inmate’s body that he or she either swallows or hides in body cavities, that other traditional searches cannot yield,” said Capt. Rene Roberts, who was instrumental in implementing the body scanner at MCCI. “That’s crucial, since any contraband that enters an inmate housing unit has the potential to cause an incident that may lead to disruption, injury or death.” 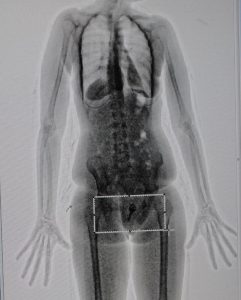 MCCI leads the way in addressing the issue of smuggling contraband into a correctional facility in New Jersey. However, that was not met without hard work and challenges corrections officials had to make in order to get approval from the state to operate the device.

“In order to allow full body X-Ray scanners for inmate screening, the law had to be amended to permit correctional facilities to utilize the body imaging scanning equipment,” said Sheriff Golden. “I commend corrections officials, the Warden’s Association of New Jersey and the Monmouth County Board of Chosen Freeholders who worked diligently to secure legislative support in favor of changes necessary to permit full body X-Ray screening for inmate processing. That determination has helped ensure safety for all at the facility.”

The legislature passed the required legislation and was signed into law by Governor Chris Christie in January, 2016.

Approximately fifty corrections officers are trained to use the machine. The device is serviced twice a year and inspected by the NJ Department of Environmental Protection annually. The cost of the unit is approximately $168,000, an investment in security for inmates and correctional staff, as well as a deterrent to lawsuits that may occur when drugs are successfully smuggled into the jail and an inmate causes harm to him/herself by ingesting them.

For a downloadable version of this press release, click here:  News-Release-MCSO-Corrections-Division-First-in-State-to-Utilize-Body-Scanner-to-Detect-Contraband

Sheriff Golden Continues To Stress The Importance Of Child Safety Through SEEK...