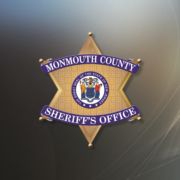 Monmouth County: Sheriff Shaun Golden commends detectives from the Monmouth County Sheriff’s Office Law Enforcement Division for the apprehension of an individual who called in false bomb threats to the Monmouth County Social Services offices, located in Freehold and Ocean Township.  Jessica Nusbaum, 40, of Howell Township, was charged with two counts of second degree false public alarms and faces a ten-year prison term and civil fines that could total tens of thousands of dollars.

“These types of threats are taken very seriously and will not be tolerated, to ensure the safety of the people who live and work in Monmouth County,” said Sheriff Shaun Golden. “This is a major disruption, causes fear to those who are targeted and ties up law enforcement resources, since the incidents are treated as potentially serious threats to the public.”

A total of two phone calls were received at the Monmouth County Social Services offices located at the Human Services building in Freehold. The first call occurred on October 21 and the most recent one was on January 24. Nusbaum stated in both calls that there were bombs in the buildings. Through a thorough investigation led by sheriff’s office detectives, a search warrant was executed on Nusbaum’s home in Howell Township, where evidence was collected that linked her to both calls.