Colts Neck, New Jersey: Sheriff Shaun Golden was the proud recipient of a check that was presented to the Monmouth County Sheriff’s Office for $5,100 on Wednesday Feb.26 at the Retro Fitness Corporate Headquarters in Colts Neck. Retro Fitness President & CEO Eric Casaburi donated $50 from each of his facilities that will help provide additional equipment for the Monmouth County Project Lifesaver program. The program uses radio signals to track individuals with Alzheimer’s disease and autism when they wander and become missing.

“I’m grateful to Retro Fitness for its dedication to help fund such an important program,” said Sheriff Shaun Golden. “Project Lifesaver is a lifesaving tool for families who have loved ones with a condition or illness that causes them to wander. It can benefit them greatly by the safety and security provided through participation in the Project Lifesaver program.” 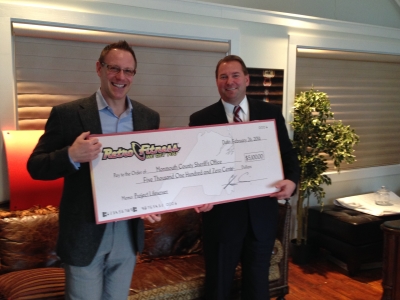 Since its implementation in 2003, Monmouth County has had seven rescues of individuals who have wandered, all under thirty minutes, the fastest in nine minutes. The partnership between the Monmouth County Sheriff’s Office and the Monmouth County Office on Aging was initially funded through the purchase of equipment made possible through a grant from the Older Americans Act.

The program was expanded to include individuals with autism in 2007 with the Monmouth County Department of Human Services joining the partnership and securing funding with grants from New Jersey Natural Gas Company, Jersey Central Power and Light Company and a grant from the State of New Jersey.

There are currently eighty-nine individuals on the Project Lifesaver program, twenty-five adults and sixty- four children in Monmouth County. Just recently, a teenager who went missing from Marlboro in 2013 was placed on the program. The money donated through Retro Fitness will be used to expand this invaluable program further, with the intent of sparing families a lot of grief when locating a loved one who goes missing.

“We are extremely delighted to make this donation on behalf of our franchisees,” said Eric Casaburi, President and CEO of Retro Fitness. “We know it is for a great cause, as the Monmouth County Sheriff’s Office is always working to keep our residents safer and towns more secure. I am proud to be part of Project Lifesaver and more specifically the personal safety tracking device.”

Each radio transmitter worn by an individual has a unique frequency. Should the client become missing, the Sheriff’s Office has four receivers with which to track the missing individual. The range for the radio receiver is one mile on the ground, one quarter mile when roof mounted and five to seven miles in a helicopter.

Applications for enrollment in Project Lifesaver are processed through the Monmouth County Office on Aging. Once approved, the applications are sent to the Monmouth County Sheriff’s Office where personnel go to the residence of the individual, teach the family about Project Lifesaver and install the wristlet (transmitter). Sheriff’s personnel will return in either 30 or 60 days, depending on the model of the transmitter, to change the batteries and check on the condition of the client. Should the client be reported missing, sheriff’s officers immediately respond with the Project Lifesaver receivers to locate the missing individual.

Due to covid-19 many Veteran events have been postponed or cancelled . We will post updates from  Veteran organizations as they’re received. Please check the website regularly for new events

Due to conditions created by the COVID 19 Pandemic, and the social distancing requirements, plus the logistics and extraordinary safety measures that would be required to successfully and meaningfully facilitate the program, Sheriff Youth Week has been cancelled for 2020.

All classes are cancelled until
further notice.  Please check back soon for updates.