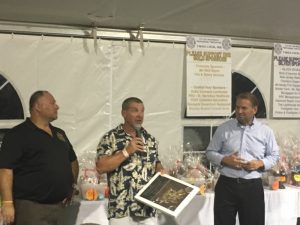 Long Branch: Sheriff Shaun Golden was grateful to be honored as the 2016 Man of the Year by the Long Branch Professional Firefighters Association – FMBA Local 68, during a fundraiser at Rooney’s Oceanfront in Long Branch.

“I’m extremely honored and humbled by this distinction from FMBA Local #68 which represents the career firefighters and officers in the city of Long Branch. Their dedication to residents and contributions to public safety are to be commended,” said Sheriff Shaun Golden. “Monmouth County’s firefighters, paid and volunteer are true heroes, wh 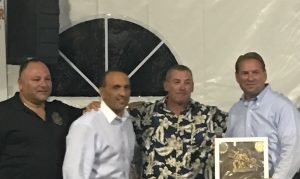 o dedicate their lives day in and day out.”

Sheriff Golden was recognized for his dedication, support and commitment to firefighters throughout the year. He is also in the forefront when it comes to providing new technology to Long Branch firefighters who utilize the latest software to access vital information upon arrival to an active scene.

For a downloadable version of this press release, click here:  News-Release-Sheriff-Golden-Grateful-to-be-Honored-as-Man-of-the-Year-by-Firefighters