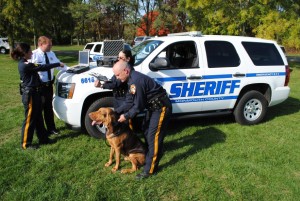 Since its implementation in 2003, Monmouth County has had seven rescues of individuals who have wandered, all under thirty minutes, the fastest in nine minutes. The partnership between the Monmouth County Sheriff’s Office and the Monmouth County Office on Aging was initially funded through the purchase of equipment made possible through a grant from the Older Americans Act.

The program was expanded to include individuals with autism in 2007 with the Monmouth County Department of Human Services joining the partnership and securing funding with grants from New Jersey Natural Gas Company, Jersey Central Power and Light Company and a grant from the State of New Jersey.

There are currently 122 individuals on the Project Lifesaver program, 40 adults and 82 juveniles in Monmouth County.

Each radio transmitter worn by an individual has a unique frequency. Should the client become missing, the sheriff’s office has five receivers with which to track the missing individual. The range for the radio receiver is one mile on the ground, one quarter mile when roof mounted and five to seven miles in a helicopter.

Applications for enrollment in Project Lifesaver are processed through the Monmouth County Office on Aging. Once approved, the applications are sent to the Monmouth County Sheriff’s Office where personnel go to the residence of the individual, teach the family about Project Lifesaver and install the wristlet (transmitter). Sheriff’s personnel will return in either 30 or 60 days, depending on the model of the transmitter, to change the batteries and check on the condition of the client. Should the client be reported missing, sheriff’s officers immediately respond with the Project Lifesaver receivers to locate the missing individual.

According to Project Lifesaver, the program is in forty-eight states in the U.S. and has performed 3,079 searches over the last 17 years.