Monmouth County Sheriff Shaun Golden continues to make the safety of children throughout Monmouth County a priority. The agency’s bilingual Dangers of Strangers program is being presented to elementary school students throughout Monmouth County in an effort to promote the safety of children and keep them out of harm’s way. On Mar. 4, the program which makes students aware of the Dangers of Strangers in their communities and elsewhere, was presented to 86 elementary school students at the C. Richard Applegate Elementary School in Freehold.

Sheriff’s Officer Manuel Rosario presented the 45 minute program to students from the third grades. It teaches them what to do if a stranger tries to engage them in conversation, whether on the street, on the telephone, when home alone or on the internet. 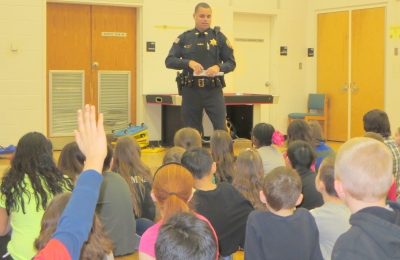