According to the Centers for Disease Control deaths from drug overdose have been rising steadily over the past two decades and have become the leading cause of injury death in the United States.

“Educating adults on how to properly safeguard prescriptions drugs can help reduce the prescription drugs that are readily available to our children,” said Sheriff Shaun Golden. “That’s vital since prescription drugs are considered a gateway drug to other dangerous and serious street drugs.” 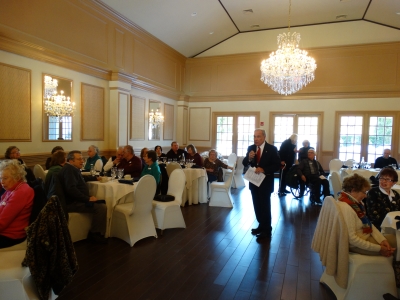 The “Lock Your Meds” program, initially developed collaboratively by King Pharmaceuticals, the National Family Partnership, the National Sheriffs’ Association and the National Association of Triads, Inc., teaches the importance of inventorying and securely storing prescription medications and the proper disposal of medications when completed. The program also stresses that prescription drugs can be just as addictive and just as lethal as drugs bought on the street when not used properly.

The most recent statistics in Monmouth County indicate that in 2012, there were 88 reported deaths of a drug related overdose. Of them, 65 had prescription or over the counter drugs listed as the cause of death.

“These prescription drugs are easily accessible to teens from the home medicine cabinet, and, often teens may falsely believe that because they are prescription drugs, they are safe and non-addictive,” said Sheriff Golden. “It’s crucial that drugs, unused, unwanted or expired lurking in people’s medicine cabinets do not end up in the wrong hands.”

In addition to locking prescription drugs, it’s important to dispose of unwanted and expired medications properly. On Saturday April 26th from 10a.m. to 2p.m. the Monmouth County Sheriff’s Office will take part in this year’s National Take Back Initiative. The one day program is free and anonymous, where residents can dispose of expired, unwanted prescription medications in pill or liquid form at the Monmouth County Sheriff’s Office, 50 East Main Street, Freehold. The sheriff’s office also has a permanent collection site located at the back entrance to the office, which can be utilized Monday through Friday, 8a.m.to 4p.m.