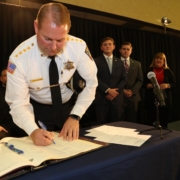 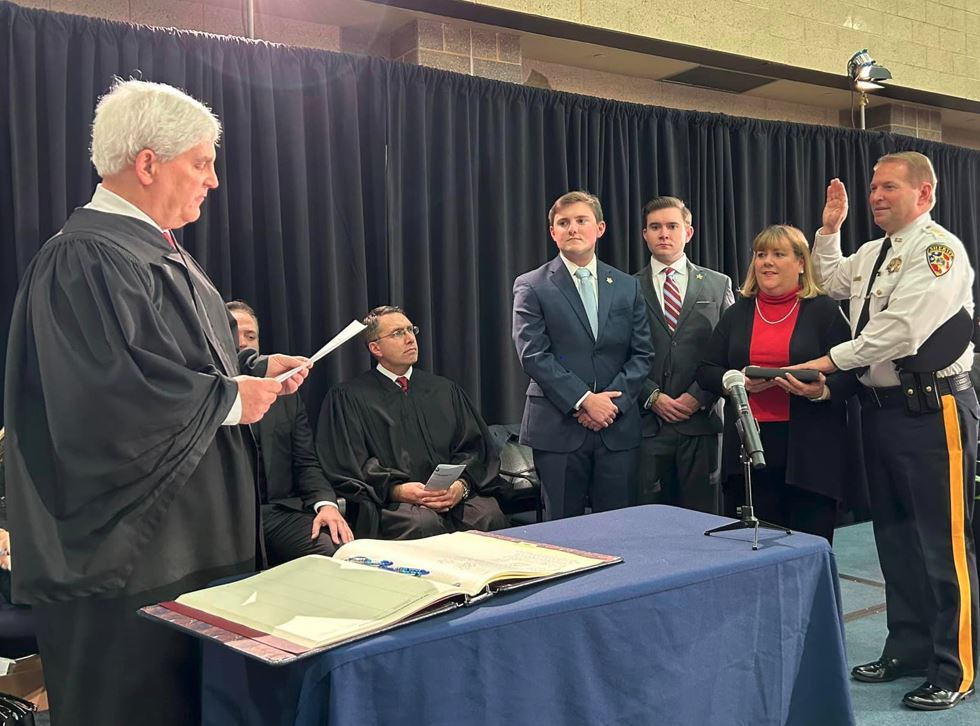 Freehold: Shaun Golden was honored to be sworn in as the Monmouth County Sheriff for a fifth, three-year term, by Honorable Joseph W. Oxley, Monmouth County Superior Court, on Jan. 5, during the Board of Monmouth County Commissioners Organization Meeting at Biotechnology High School. Sheriff Golden proudly leads 675 officers and employees dedicated to serving the public safety needs in Monmouth County through the Law Enforcement, Communications, Corrections, Civil Process and Special Operations Divisions as well as the administration of the Monmouth County Office of Emergency Management, the Monmouth County Police and Fire Academies.

“It is an honor to have been re-elected to a fifth term as Monmouth County Sheriff and I thank the residents for their continued support,” said Sheriff Golden. “It’s my privilege and duty to serve all who live, work or visit this great county, in the safest, most effective and efficient manner for another three years. Together with the Board of County Commissioners we will continue to work on combatting crime and strengthen our shared services and safety initiatives so that Monmouth County remains one of the top counties in the State of New Jersey.” 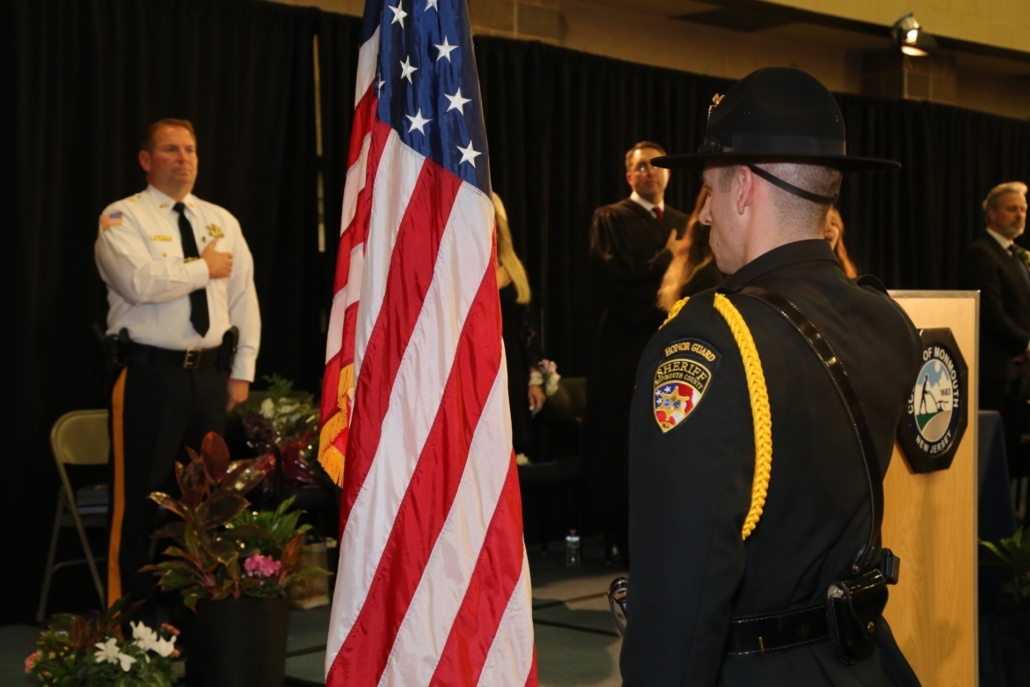 He leads the way in the fight against drug abuse and has an integral role in prevention through programs and services the agency provides. Sheriff Golden implemented the HOPE One Mobile Unit, a leading edge approach to combating the opioid epidemic in Monmouth County, and is a supporter and participant of the drug takeback program. Sheriff Golden has bolstered homeland security issues and counterterrorism efforts with state, county and local law enforcement agencies, to maintain the safety and security of residents and visitors throughout Monmouth County. He continues to address the issue of school violence with consistent active shooter drills and training, and, gang activity through gang awareness prevention. The sheriff is in the forefront of combatting auto theft and calling on state officials to take immediate action on catch and release policies and failed bail reform. He also runs the Situational Training and Response Simulator (STARS) Facility, a virtual premiere training center used by our public safety partners in Monmouth County and throughout the State of New Jersey. 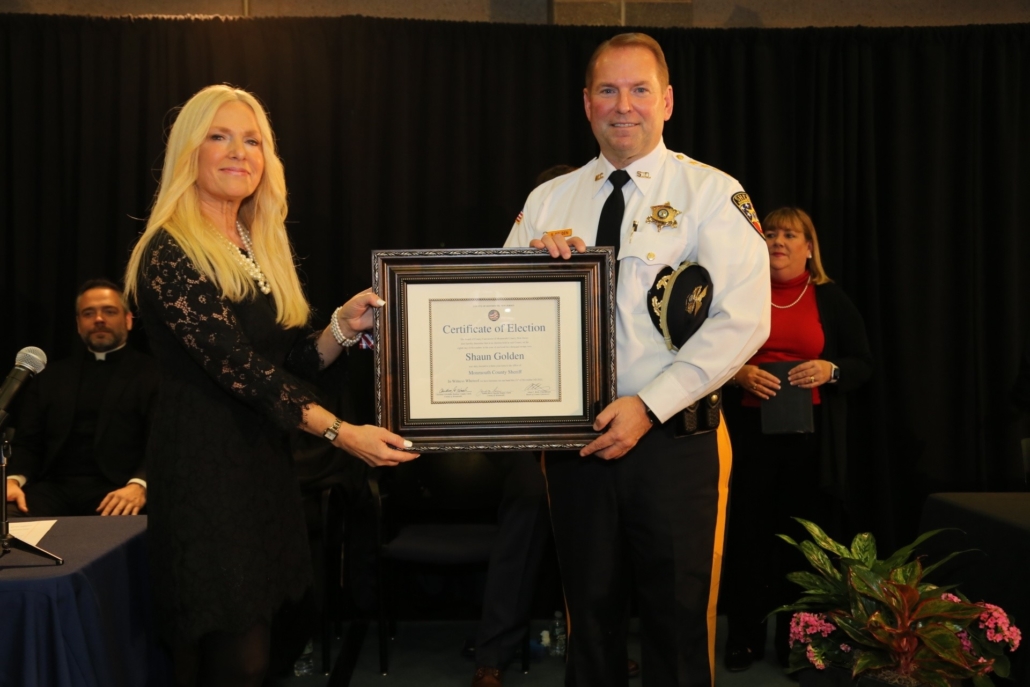 Through Sheriff Golden’s advanced technological strategies, he has enabled first responders to operate at a higher level with efficient and effective services. The sheriff’s state of the art 9-1-1 Communications Center, the largest shared service in Monmouth County, serves as a blueprint in emergency services through the most enhanced technology and hard work and intense training of public safety telecommunicators. The Monmouth County Office of Emergency Management is superior in emergency and disaster response and has developed numerous programs and initiatives in planning and preparing.

The sheriff is active in assisting veterans by providing them access to needed services and training programs through the Monmouth County Sheriff’s Office Veterans Service Council. He is an advocate for the special needs community by implementing and developing programs for families of children with autism and special needs residents, as well as training members of law enforcement how to respond to situations involving special needs individuals. In addition, the sheriff has been recognized for his extensive public safety outreach programs for seniors and children. 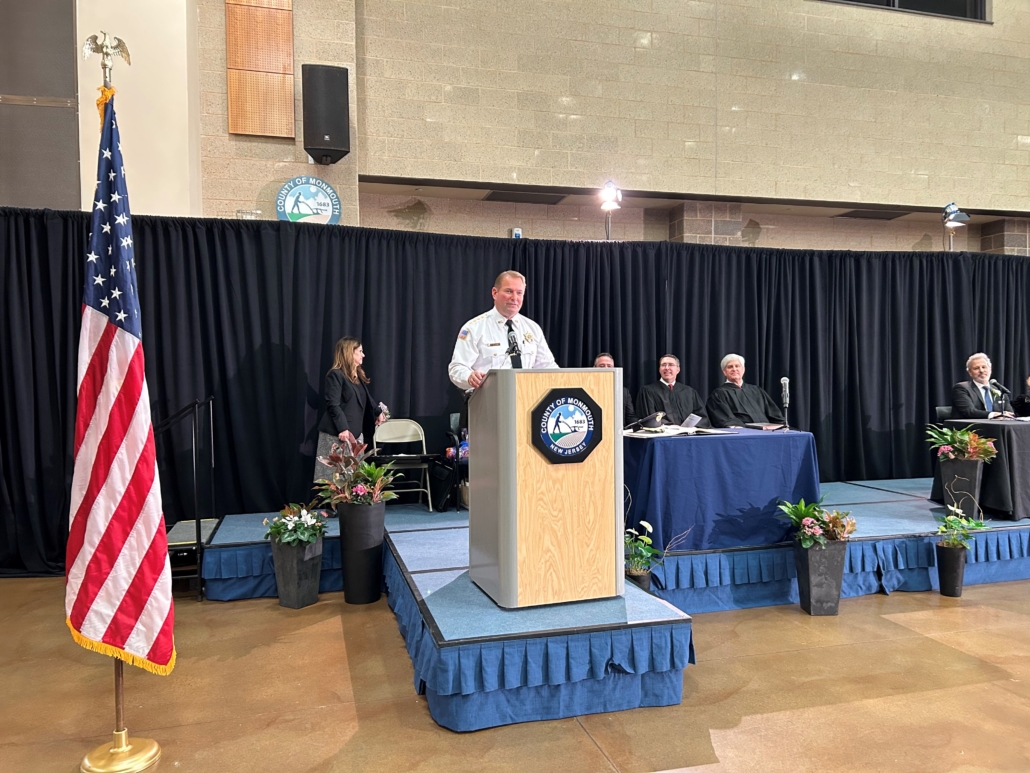 “I am proud to support Sheriff Shaun Golden and all members of law enforcement throughout Monmouth County for the work they do to defend and protect our communities,” said Commissioner Director Thomas A. Arnone, who was also sworn in to a three year term and appointed as Director of the Board.  “The Monmouth County Board of County Commissioners looks forward to continuing to work alongside Sheriff Golden to serve the residents of Monmouth County.”

“These accomplishments have been made through the dedicated efforts of employees from all of the sheriff’s office divisions, who faithfully serve the people of Monmouth County, and, through the continued support of the Monmouth County Board of County Commissioners.” said Sheriff Golden. “Public safety, the fight against drug abuse, auto thefts, emergency services, assisting our special needs community and veterans, among other important initiatives, will remain our main focus, as we move forward into the next three years.”

For a downloadable version of this press release, click here:  News Release – Sheriff Shaun Golden Takes Oath of Office as He Continues to Serve Residents of Monmouth County