“This initiative is another innovative step that keeps the Monmouth County Sheriff’s Office in the forefront of law enforcement and public safety,” said Sheriff Shaun Golden. “These Tasers are lifesaving mechanisms that can deter lethal force and danger to an officer, an innocent bystander, a victim of a crime or a suspect.” 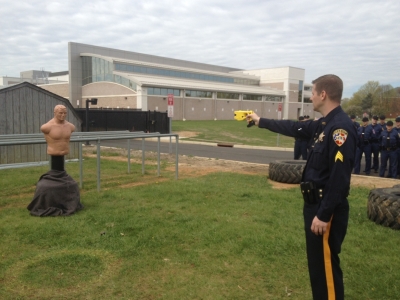 The Monmouth County Sheriff’s Office Law Enforcement Division, consists of the warrants fugitive bureau and five K-9 teams which assist in narcotics & explosive detection and criminal and missing person searches. The division also provides the security for the Monmouth County Courthouse and other facilities.

“During high profile cases in a confined venue of a courtroom setting, the deployment of mechanical force is crucial and more practical than the use of a firearm,” said Michael Donovan, Undersheriff of the Law Enforcement Division.

“Our officers are also placed in situations that present a danger to themselves and others due to the increase in high risk crime areas and the growing drug problem that plagues our county.”

New Jersey was the last state to approve the conducted energy devices and is considered to have some of the strictest policies through the Attorney General guidelines. The Tasers must come equipped with a high definition video recorder so all incidents are recorded to ensure that the device is being used appropriately.

The Taser is a device that fires darts and transmits an electrical charge or current which temporarily disables an individual.

“Our sheriff’s officers are deployed throughout the entire county and it is important for them to be equipped with these devices, which must and will be used responsibly, when combatting crime and protecting the public,” said Sheriff Golden.