Freehold Township: Sheriff Shaun Golden is pleased to announce that the Monmouth County Sheriff’s Office Inmate Labor Program was in full operation the week of March 17, in an effort to help restore an historic site in Freehold Township. Five inmates from the Monmouth County Correctional Institution were transported to the Old Beth AME Cemetery Historical site and the nearby Bethel AME Church where a major cleanup was conducted. Large amounts of debris and brush throughout the grounds were removed, remnants of what the harsh winter weather left behind. The Monmouth County Sheriff’s Office Inmate Labor Program offers much needed assistance to towns, and helps lessen financial burdens they face due to budget constraints.

“I’m glad the sheriff’s office is able to provide such a valuable resource through our Inmate Labor Program,” said Sheriff Shaun Golden. “The use of inmate labor to assist with cleanups, beautification projects and storm damage recovery is a cost savings example of shared services.” 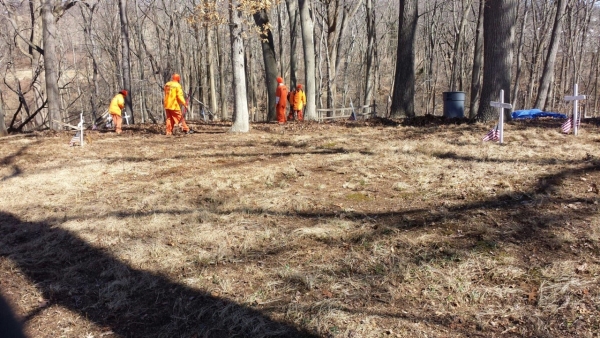 Last year, 1,260 hours were dedicated to working on a range of projects through the Inmate Labor Program. The Monmouth County Sheriff’s Office transports and provides the security of the inmate labor crews. Requests for inmate labor teams are made to the program coordinator, Medora Morris, and are evaluated in terms of the needs and feasibility of the project.

“Historic landmarks are quite often in much need of restoration,” said Sheriff Golden. “I’m pleased we are able to provide such assistance since this program not only helps the towns save money on labor but also assists the work crew in giving back to society.”
Past inmate labor projects have included cleanup from storm damage recovery, carpentry, painting, working with parks and public works departments and the restoration of other historic sites.