Freehold: The Monmouth County Sheriff’s Office Inmate Labor Program was in full in operation in Freehold where they assisted with landscaping projects at Lake Topanemus Park. During the week of Aug. 4, five inmates were transported to Lake Topanemus from the Monmouth County Correctional Institutional where they trimmed trees, cleared brush away from the lakefront, weeded, mulched and cleaned up debris. The Monmouth County Sheriff’s Office Inmate Labor Program offers much needed assistance to towns, and helps lessen financial burdens they face due to budget constraints.

“I’m glad the sheriff’s office is able to provide such a valuable resource to municipalities through our Inmate Labor Program,” said Sheriff Shaun Golden. “The use of inmate labor to assist with the cleanup of our recreational areas, communities and storm damage recovery is a cost savings example of shared services.” 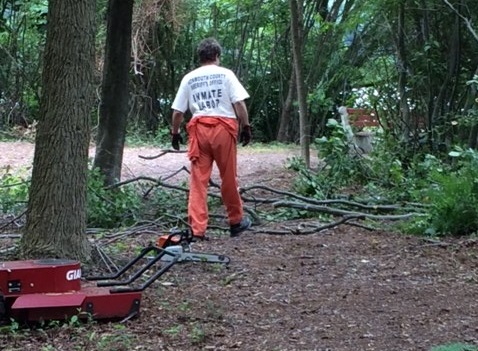 Last year, 1260 hours were dedicated to working on a range of projects through the Inmate Labor Program. The Sheriff’s Office transports and provides the security of the inmate labor crews. Requests for inmate labor teams are made to the program coordinator, Medora Morris, and are evaluated in terms of the needs and feasibility of the project.