Long Branch: The Monmouth County Sheriff’s Office Inmate Labor Program was in full in operation in Long Branch to assist the board of education with end of the year work projects. During the week of June 23 five inmates were transported to the Long Branch Board of Education from the Monmouth County Correctional Institutional where they moved furniture, books and supplies at schools. The Monmouth County Sheriff’s Office Inmate Labor Program offers much needed assistance to towns, and helps lessen financial burdens they face due to budget constraints.

“I’m glad the sheriff’s office is able to provide such a valuable resource to municipalities through our Inmate Labor Program,” said Sheriff Shaun Golden. “The use of inmate labor to assist with work projects, the cleanup of our communities and storm damage recovery is a cost savings example of shared services.” 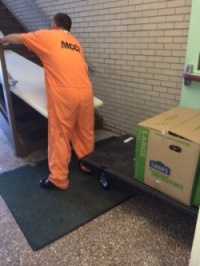