Freehold: It is with deep regret that the Monmouth County Sheriff’s Office announces the passing of its K-9 Evan, beloved partner of Sheriff’s Officer Kurt Kroeper. The seven year old Labrador retriever, who specialized in narcotics detection, was diagnosed with cancer two months ago. Although his prognosis was hopeful, Evan developed an infection and died on Friday, June 27.

“Evan was an extraordinary member of the Monmouth County Sheriff’s Office K-9 Unit,” said Sheriff Shaun Golden. “He played a pivotal role in ridding the streets of drugs that plague our county. Evan will be missed and never forgotten.” 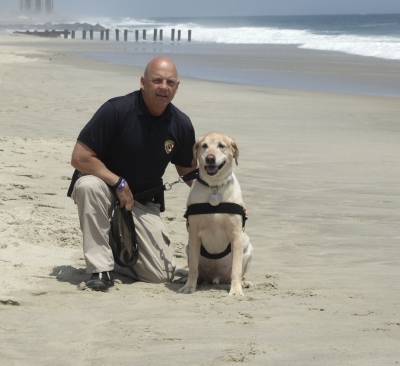 Evan came to the sheriff’s office upon graduating from the Holmdel Township Police Canine Academy. He began service in 2009 with S/O Kroeper. Throughout the course of their work, S/O Kroeper and Evan seized an excess of more than $1.1 million in cash, a result of numerous drug investigations. The K-9 team also located a significant amount of narcotics including heroin, cocaine and marijuana, which led to the arrests of hundreds of individuals. Evan was a familiar face throughout Monmouth County as he and S/O Kroeper conducted K-9 demos at schools and community events throughout the year. Evan remained on duty during his course of treatment, at the recommendation of veterinary specialists.

“Evan and I shared a special bond, we worked together, lived together and protected one another,” said S/O Kurt Kroeper. “I’m grateful to have had such an outstanding partner and appreciate all of the support in recent months.”