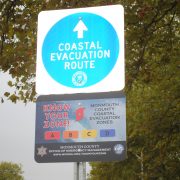 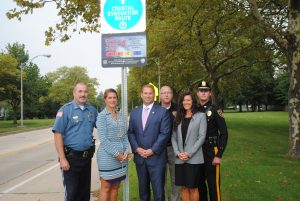 “There is no better time than now to launch these ‘Know Your Zone’ signs as we enter the peak of hurricane season in Monmouth County,” said Sheriff Shaun Golden, whose agency oversees the Monmouth County Office of Emergency Management, OEM.  “With the fifth anniversary of Hurricane Sandy upon us, and the recent events unfolding in Texas, I hope that residents, visitors and businesses take this time to visit the website www.mcsonj.org/knowyourzone and familiarize themselves with the zone in which they live.”

The ‘Know Your Zone’ campaign was implemented by OEM last September in an effort to educate residents, visitors and businesses about the coastal evacuation zones. ‘Know Your Zone’ is the first of its kind in New Jersey and directly connected to the Monmouth County’s Coastal Evacuation Plan. It will allow OEM to direct any evacuation instructions to those that are at the greatest risk of experiencing storm surge during major coastal storms in protection of lives and property.

The tiered system creates 4 distinct zones A, B, C, & D and will allow for clearer and more decisive messaging when evacuations are needed.  As the public becomes aware of which zone they are in, evacuation messaging will be directed toward a specific zone.

Since the program launched, 6,317 people have visited the site to learn in which zone they are located.

“Monmouth County leads the way in storm preparedness and I’m pleased to see the interest and participation in such a vital program to our coastal communities,” said Freeholder Serena DiMaso. “As liaison to OEM, I can’t stress enough how important it is to have this information prior to a storm.” 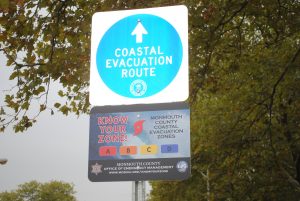 Seventy signs are being placed in coastal communities throughout Monmouth County with the first location adjacent to the Rumson- Sea Bright Bridge.

“We are happy to have the first sign erected here at the Rumson-Sea Bright boarder,” said Sea Bright Mayor Dina Long and Rumson Mayor John Ekdahl. “As two coastal communities, we’ve both experienced the devastating impact of large coastal storms.”

National Preparedness Month follows the four basic pillars of individual preparedness, Make a Plan, Be Informed, Make an Emergency Kit and Get Involved. Sheriff Golden is urging those within Monmouth County to get involved and become informed of their coastal evacuation zone by ‘Knowing Your Zone’.

For a downloadable version of this press release, click here:  News-Release-Sheriff-Unveils-Important-Coastal-Safety-Signs-as-National-Prep-Month-gets-Underway-Sept-6

Sheriff’s Office to Enhance Patrols for the Anniversary of September ...
Scroll to top