Tinton Falls: Sheriff Shaun Golden is pleased to announce that the cleanup efforts which rid the areas of litter along Shafto Rd. and Asbury Ave. by the Monmouth County Reclamation Center have been a success. The sheriff’s office took action after large amounts of litter plagued the area from trucks entering and leaving the facility.

“The sheriff’s office has taken a number of steps to help stop this problem and clean up the area, said Sheriff Shaun Golden. “Through the use of our inmate labor program, digital road signs and the presence of our sheriff’s officers warning truck operators of the consequences they face from littering, the area is now well maintained and free from the trash that can become a hazard to the environment as well as an eyesore to the area.” 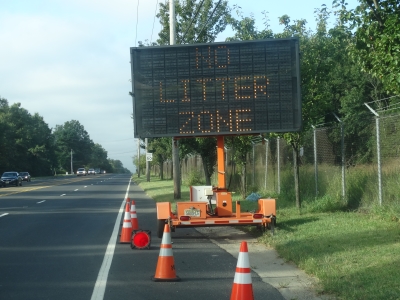 The Monmouth County Sheriff’s Office roadside assistance to the Reclamation Center area began with its Inmate Labor Program in August. Inmates cleaned up the trash and debris along Shafto Rd. and Asbury Ave., caused by drivers whose trucks were not properly covered to safeguard the trash from flying. By Labor Day, the digital road signs were in place warning drivers of the enhanced and renewed enforcement to the area, which began Sept. 8 and lasted for two weeks.

“We are grateful to the sheriff’s office for their assistance. This has not only been a cost savings through their inmate labor program, but a great example of shared services,” said Mayor Gerald Turning. “I commend all of those involved who have helped make this cleanup effort a success.”

Sheriff’s officers were present by the reclamation center in the early morning hours when there was a lot of truck traffic. They provided drivers with numerous warnings and enforced proper anti-litter procedures of truck operators. Violaters may face up to $500 in fines.

“We are hopeful the truck operators who utilize the facility will obey the local ordinance since they have been provided with fair warning,” said Chief John Scrivanic. “There’s no excuse for them to not properly secure the tops of their trucks and we won’t tolerate littering on our roads.” 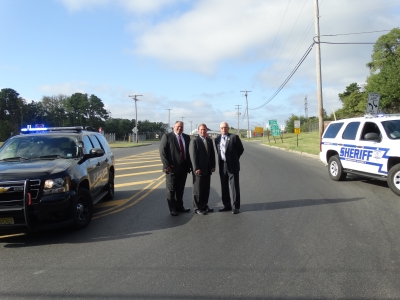 Clean Communities of Monmouth County was also instrumental in the cleanup. They initially reached out to Inmate Labor to request assistance.