Freehold: Sheriff Shaun Golden along with Monmouth County emergency management officials, are taking disaster preparedness a step further when it comes to ensuring the safety and wellbeing of residents and their communities. On June 1 and June 2, in an effort to kick-off the first day of the 2015 hurricane season, the Monmouth County Sheriff’s Office hosted “Leading through Crisis” a seminar geared toward mayors, police chiefs and emergency management coordinators, which provides a pro-active approach to preparedness and awareness.

“This collaborative effort enables us who deal in emergency and disaster related situations to come together, as we approach the hurricane season,” said Sheriff Shaun Golden. “The program will provide local officials with additional tools that will assist them in leading their communities through preparation, response, recovery, and mitigation phases of natural and man-made crisis situations.”

The training program, which was formed by the sheriff’s office, the National Association of Counties, emergency management entities from across the country and Cardinal Point Strategies brought more than 100 local officials together from the Bayshore region, coastal, western and eastern parts of Monmouth County. Important elements on to how deal with crisis situations were expanded upon in detail, such as, how to build an executive crisis team, how to develop a community preparedness framework, how to determine who is in charge of operational and tactical roles and who leads the response of the operation, mitigation and recovery process at the local level. 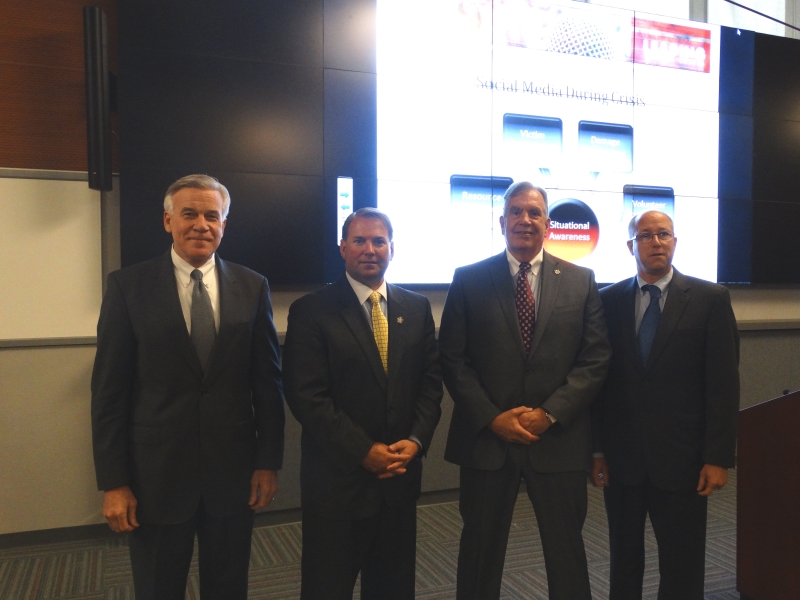 In addition, prioritizing decision making, becoming aware of resident’s expectations and how to develop an economic disaster preparedness plan, economic disaster budget and loss mitigation plan were discussed. How to determine and calculate damage assessment and FEMA reimbursement was also presented.

“It’s vital all of the participants of this training program become equipped with the necessary information in disaster preparedness,” said Monmouth County OEM Coordinator Michael Oppegaard. “However, it doesn’t stop there. Educating residents about preparing, planning and staying informed makes dealing with weather related events or other crisis situations easier and less stressful.”

The Monmouth County Sheriff’s Office, Office of Emergency Management was the lead in preparing for Superstorm Sandy and coordinating the response and recovery efforts during and after the storm which led to an exceptional call to action. A video detailing the response from the Monmouth County Sheriff’s Office, OEM was presented during the seminar.

“Seminars such as this help us evaluate our strengths and weaknesses when it comes to response and helps increase our efforts for future emergencies,” said Terence Mahon, Avon By-the-Sea Police Chief and President of the Monmouth County Police Chiefs Association. “I commend the sheriff’s office for hosting such an informative and instructive program which will keep Monmouth County in the forefront when dealing in crisis situations.”